Shopping, Food, and Cultural Show at the 21st Global Mela 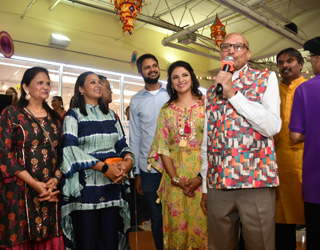 On October 8 and 9, to kick off the festival season, thousands thronged to the Global Mall in Norcross to participate in the 21st Global Mela on a gorgeous fall weekend. After two and half years of being on a stressful physical and emotional rollercoaster due to the pandemic, the South Asian community rejoiced at being able to gather in-person again for Atlanta’s largest South Asian shopping and family-friendly festival. With a crowd of thousands in attendance over two days, Global Mela has been coined by few as the “Black Friday for South Asian Shopping.”

This was Global Mall’s 21st year hosting Global Mela. Although the Mela has grown a lot since the first Mela, some things haven’t changed. Global Mall founder and community leader, Shiv Aggarwal, described the concept behind Global Mall and Global Mela in a few words, “The idea is to unite the community and create a feeling of oneness allowing people in the community to shop, eat, attend events, and gather with friends under one roof while celebrating our rich South Asian culture.” 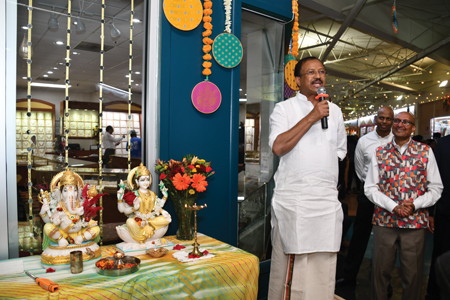 Global Mall’s over 25 retail tenants, two salons, and 40 temporary vendors took part in the Mela offering huge discounts in clothing, jewelry, and accessories. Speaking on the event, Hayal Bhatt, the owner of Ladlee, stated “[Mela] is one of the events that we mostlook forward to in the year. The organizers go over and beyond to make it fun for all ages. It is a time we get to show what we represent in terms of quality and offer great value, which results in a great turnout for us!”

Speaking on the occasion, Dr. Kulkarni said she and the Atlanta community were honored to welcome Muraleedharan and gave a brief introduction of the Kerala-born minister. She also lauded Aggarwal and his family for organizing the Global Mela.

Addressing the gathering, Muraleedharan said he was thrilled to see so many South Asians in one building for this festival, “When I came here and saw this event, I was wondering if I am in a mini Bharat. I feel proud that you have created a little India in this part of the world. I would like to congratulate you all for that.”

He wished Happy Global Mela and Diwali to all. He also draped a shawl on Atlanta’s veteran and prolific freelance journalist Mahadev Desai and presented him with a plaque. (Read more about Mahadev Desai in the Newsmakers section.) 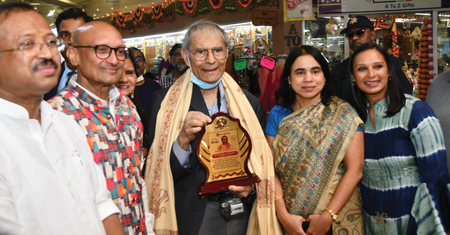 Throughout the two days, the attendees were kept enthralled with Bollywood beats. DJ Bobby from XtraHotDJs kept the crowds dancing all weekend. There were a variety of performances by dance schools, individual performers, and musical groups. This year, dance participants of the cultural program included a new dance school, Steps and Styles, along with The Amazing Kids, Ashna Joshi, and Global Mall’s two resident dance schools: Nitya Natya Kala Bharti and Prem Dance Academy. The performances also included two musical sets by Manisha and Anand Mehta and Gaudiya Vaishnava Association.

Children spent the weekend enjoying the inflatable rides set up outside the mall and were treated to food and fun inside with free popcorn, cotton candy, and face painting provided by Global Mall. Additionally, the 3 pm magic show captured the attention of over 150 kids over both days with free party favor bags and kids-only raffle prizes after the show. Like every year, free raffle prizes were given out every hour; and this year, over 150 people won free raffle prizes sponsored by Global Mall and its tenants and vendors, including two very lucky winners who won 55” TCL Smart TVs sponsored by Legacy Jewels and the Global Mall family.

Global Mall outdid itself once again with record attendance, more vendors, more free prizes, and even bigger sales. The event continues to grow with the support of the community at large.