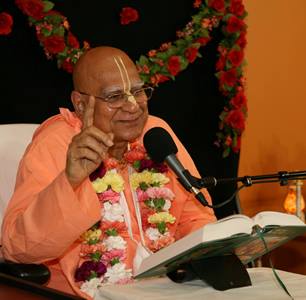 His Divine Grace B.S. Tirtha Maharaj, the Founder Acharya of Gaudiya Vaishnava Association, visited Atlanta as part of his "Spirituality In Spring" North American tour during April - May 2015. A foremost speaker of Bakthi Yoga and preacher of Vedic scriptures, Shrila Maharaj is well known for speaking the hard truth. His mission is to convey the original meaning of the scriptures, giving an authentic rendition of the Vedic conclusions on important topics such as the Purpose of human life; Body, mind, and soul; God consciousness; Bhakti yoga; Family; Relationships; Community; Country; and most importantly Service to Lord Shri Krishna. Shrila Maharaj gave discourses from the 4th Canto of the Shrimad Bhagavatam. The Shrimad Bhagavatam is the natural commentary on the Vedanta Sutra by the author of the Vedanta Sutra Himself – Shrila Vedavyasa. The well attended programs were held at three locations (Alpharetta, Cumming, and Johns Creek).

During the first week, Shrila Maharaja described in detail the purpose of human life: devotional service to Lord Shri Krishna. He also gave the history of Daksha prajapati cursing Lord Shiva, the talks that followed between Sati and Lord Shiva, and eventually how Sati quits her body. Many of us have heard Dhruva Charitram (life history of King Dhruva Maharaj), but this rendition by Shrila Maharaj is unique as he presented the history of the young Prince Dhruva along with the philosophy behind it. We all like to hear the Lord's pastimes (lilas), but if it is not backed up by in-depth philosophy, then it becomes only dry speculation. Dhruva Maharaj's determination to see the Lord and his devotion at a very young age were nicely narrated by Shrila Maharaj.

To understand one's relationship with his family, relatives, community, country, and the whole world, Shrila Maharaj discussed in detail about King Prthu. One of the descendants of King Dhruva, he is an incarnation of the Lord. King Prthu's anger at Mother Earth for not providing for the inhabitants, how King Prthu was able to provide the necessities for the inhabitants from Mother Earth, His Ashwameda yagna performance, Lord Vishnu's appearance at the sacrifice, King Prthu meeting the four Kumaras and finally leaving for His eternal home were all elaborately explained by Shrila Maharaj. King Prthu as the ideal head of the state guides His subjects on the path for emancipation from the threefold miseries of this world. He advises, "Engaging your minds, your words, your bodies, and the results of your occupational duties, and being always open-minded, you should all render devotional service to the Lord. According to your abilities and the occupations in which you are situated, you should engage your service at the lotus feet of the Supreme Personality of Godhead with full confidence and without reservation. Then you will surely be successful in achieving the final objective in your lives."

Discourse in Johns Creek: Self Realization

In the third and final week of lectures, Shrila Maharaj discussed the body, mind, and soul connection. He presented the story of King Puranjana as explained by the great saint Narada. This is an allegory for how the soul is encaged within a body controlled by the mind due to the unlimited desires that arise in it. Everything happening within time, which consists of past, present, and future, is merely a dream. That is the secret understanding in all Vedic literature. If a living entity is developed in Krishna consciousness and is merciful to others, and if his spiritual knowledge of self-realization is perfect, he will immediately attain liberation from the bondage of material existence.

Shrila Maharaj during the discourse.

The final day started with inspirational kirtans by Shrila Maharaj, followed by trophy and certificate distribution to all the children who participated in the Gaura Purnima celebrations held in March 2015. Shrila Maharaj distributed fruits prasadam to all those assembled. As a grand finale, fireworks were displayed and the children enjoyed it thoroughly followed by a sumptuous dinner prasadam.

The scriptures say that hearing Shrimad Bhagavatam from a self-realized pure devotee of God is very important. Shrila Maharaj traveled to Texas, Connecticut, and New Jersey as part of Gaudiya Vaishnava Association's 'Spirituality in Spring' program. His books, CDs, and DVDs are in English, Hindi, Tamil, and Bengali.