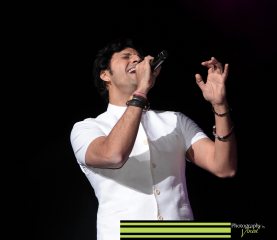 In recent years, India’s entertainment industry has seen an infusion of new talent. Gone are the days when the number of successful film music composers in India was small enough to count on your fingers. A number are producing wonderful music today and finding success and fame. Among these are the duo Salim-Sulaiman, who have had a string of successes to their credit. These brothers entered films as scorers of background music and are now noteworthy among the new crop of talented composers.

Salim and Sulaiman Merchant literally grew up with music, encouraged by their music-director father, Sadruddin Merchant, and the family’s business of manufacturing musical instruments. There is a strong element of divinity and Sufism in their scores, enriched by the original and trained voice of Salim. These qualities, along with their remarkable use of chorus and concert symphonic effects, orchestral fusions, and incorporation of digital sounds, have helped them create a whole new genre of music. They have been able to a produce striking combination—notes that are heavenly in their simplicity, with a richly complex orchestration. Not surprisingly, their tunes have caught the imagination of music lovers in India today. 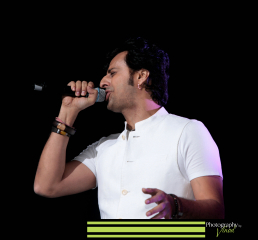 At Salim-Sulaiman’s Fox Theater concert recently (3/3/12), the orchestra included talented keyboard player Gurnal, guitarist Verma, percussionists, a drummer, and a small string ensemble: Rover and Sheena on first violin, Z and Esther on second violin, Adam on cello, and Mathew and Daisy on viola—besides a three-person chorus. The grand stage had swiveling colored lights and a video screen. Lead vocals, besides Salim, included Benny Dayal, Shadab Faridi, and Shraddha Pandit, who is related to the renowned Pandit Jasraj.

The Fox Theater is always acoustically delightful, and at this concert the starry Fox reverberated with the crisp and well-balanced sounds of each element of their music, distinctly heard. Opening with an attractively produced high-voltage video of their songs from Rab Ne Bana Di Jodi, they followed with the somber “Aye Khuda” from the movie Paathshala, which featured a piano solo and a string ensemble. Matching the devotional element in the song was the priest-like outfit of Salim, white shirt and lungi, with silver waist belts. He was accompanied on vocals at times by Sulaiman, casual in blue jeans and black jacket. They flowed smoothly to “Aashaayein” from Iqbal, and to a song from Fashion. Shadab Faridi, in couture jeans and a heavily embroidered black kameez, rendered “Fashion Ka Hai Yeh Jalwa.” Popular songs from movies like Rab Ne Bana Di Jodi, Chak De India, Band Baaja Baraat, Kurbaan, and Ladies Vs. Ricky Bahl followed: “Haule Haule Se Hawa,” “Tujh Mein Rab Dikhta Hai,” “Dance Pe Chance,” “Chak De,” “Dum Dum,” “Shukran Allah,” “Kurbaan Hua,” “Ali Maula,” “Jigar Da Tukda,” “Thug Le,” “Aadat Se Majboor,” and “Mar Jawan.” Benny Dayal was casual in jeans, T-shirt, and black leather jacket, while Shraddha Pandit was trendy in sparkling formal Western attire. Pandit’s renditions clearly showcased her classical training and control over her vocal range. The evening’s repertoire was well received with young and old alike on their feet, dancing in the orchestra pit, as Sulaiman kept throwing autographed T-shirts out to the crowd. 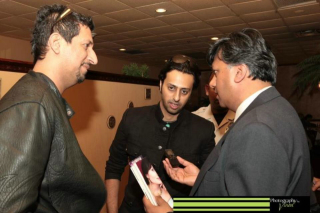 Earlier in the afternoon, Salim, Sulaiman, and Shraddha Pandit spoke to Khabar :

Salim and Sulaiman, you are from Kutch, Gujarat, a region with a rich tradition of music. What was your inspiration, apart from your father, in taking up music as a profession?


Sulaiman: It was not an inspiration, but something like a passion. Sure, my dad was always a facilitator, in the sense that we would always have new instruments when we wanted them. We were dealers and manufacturers of musical instruments, so instead of toys, we had music instruments to play with! It was natural for us to take up music at a very early age. I guess it was in the blood. It happened because we wanted it to happen and it was meant to be.

You’re into percussions, Sulaiman, and Salim is into keyboards as well as singing…
Sulaiman: Interestingly, we both started playing drums together. At the time Salim was of course very young and didn’t start [playing professionally] immediately.


Salim: When I started on the keyboards, both of us found our passion.

You have symphonic musicians traveling with you from Houston. They’re probably not familiar with the teevras and madhyams of Indian music. How did you get them to play your scores?


Salim: Music has a universal language, and it’s not a problem at all, really, for these musicians. It’s happened so many times in the recent past—Western orchestras playing Indian music.

What was their reaction when they started playing your compositions?


Sulaiman: They loved it. Every bit of it!

There is a divine element in your songs—a lot of Sufism. How did that come about?


Salim: Music is a reflection of our personalities. What we feel, we put down [in our music].

On stage, you always look very chic in your costumes. What stops you from being a model?


Shraddha: This is my family’s third generation in music. My uncles Jatin and Lalit are in film music, my aunts got into acting, so I think we all kind of gravitate to the silver screen.

How many years of training do you have?


Shraddha: I started very young, when I was just nine. So it’s been about 15 years of training since then, from my Dadaji.

Apart from Salim-Sulaiman, who are the other contemporary composers you’d like to work with?


Shraddha: I’ve worked with Rahman sir, but I’d like to work with him again and again. I’d also love to work with Shankar-Ehsaan-Loy, Vishal-Shekhar… and the likes.

Music has gotten so digitized that the acoustical value of music has been lost. Gone are the days when you would get to record a whole live string section at Mehbooob Studios. As a singer, how does it affect you?


Shraddha: It does affect one, sometimes. Very rarely do you get a combination of good music, great orchestration and an awesome melody. It’s generally very noisy. You have to be prepared and ready to change your voice and style and be very innovative for each dub, [and] concentrate more on these things than on your singing. It’s sad, but you can’t help it. That’s the trend.

You are trendy and forward-thinking… Do you foresee producing any non-Hindi albums in the Western hemisphere?

Salim-Sulaiman talk about their musical journey (2009)