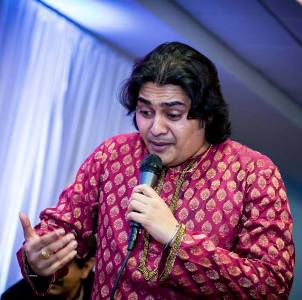 Residents of Atlanta were treated to a musical feast on the 7th of February, 2014 when they had the opportunity to hear the talented Shujat Ali Khan, a noted Pakistani classical singer who is the grandson of Ustaad Salamat Ali Khan. The dinner and concert was organized by Ejaz Naqvi. It was a full house in the Ashiana Impact Hall at Global Mall, Norcross.

Shujat Ali Khan belongs to the Sham Chaurasia Gharana which was founded in the 16th century by Mian Chand Khan and Mian Suraj Khan, contemporaries of Mian Tansen at the court of Mughal emperor Akbar. He is a playback singer for Bollywood and Pakistani, and has performed on the famous TV show Zee TV Saregamapa. For this show, he regaled the appreciative and discerning audience with Sufi, classicals, semi-classicals, ghazals, and Bollywood songs.

The show was kick started with the introduction of the famous singer by Atlanta’s poet Sadaf Farooqui. Sadaf also honored Adrita Khanna, an Atlantan who was recently honored in India by the NRI Welfare Society with the Hind Rattan 2014 award.

For three and a half hours Shujat mesmerized the audience with his unique style of singing. He was accompanied on guitar by Rommel Khan, keyboards and harmonium by Sandeep Savla, pads (percussion) by Abhishek, and tabla by Amjad Ali Kawa. Tahir Syal also entertained the audience with poetry and jokes.