South Asian Authors and Influences at the Decatur Book Festival 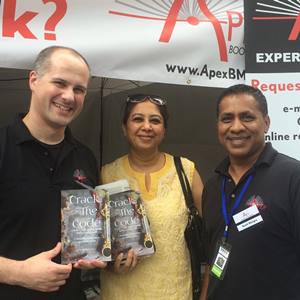 (Left) Food writer Nandita Godbole with printers who were at the AJC Decatur Book Festival displaying their books, including her book, Crack the Code: Cook Any Indian Meal with Confidence.
(Photos, except this and Pushpendra Mehta's: by Geeta Mehrotra)

The highly popular three-day annual AJC Decatur Book Festival (DBF), the country’s largest independent book fest, held on Labor Day Weekend, September 2-4, 2016, was, again, a great destination for South Asian authors and influences. The festival was bustling with energy and enthusiasm. It was good to see old and young, senior citizens, some in their wheelchairs and on walkers, young parents with their children walking around with their bags filled with books. The festival drew a large number in spite of Dragon Con going on in Atlanta and two major football games.

The weather was beautiful, cool enough to walk around the Decatur square and surrounding streets. Every nook and corner was filled with some activity or other. The Ahmadiyya Muslim Community had a booth, in the spirit of the event—a free exchange of expression in the literary arts—where they could share their message of harmony, affection, equality, and justice. While the streets were lined with booths for books and food, various nearby venues were all packed with authors addressing topics from science, poetry, history, cooking and food, civil/human rights, fiction, mystery & thriller, religion & spirituality, children’s & teen, art, etc.

The festival expands our horizons with authors from around the country, including well-known ones like the poet Coleman Barks from UGA Athens, known for his translation of Rumi, and emerging authors like Pushpendra Mehta from Atlanta.

Here are bits and pieces gleaned from visiting the South Asian authors. (For a list of South Asian authors at the 2016 festival, including both students and professors from several Atlanta area colleges and universities as well as “from away,” see the bottom of this page.) 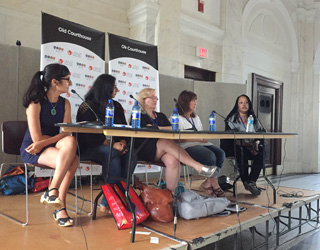 Anjali Enjeti and Soniah Kamal (L to R) with others on the Diversity in Literary Criticism panel.

The Diversity in Literary Criticism panel moderated by Anjali Enjeti was a major draw. Anjali, an award-winning essayist, journalist and literary critic and panelist Soniah Kamal, an award-winning novelist and essayist were amongst those who addressed the issues of marginalized communities, whose authors often find that big publishing houses turn them down. The panel of book reviewers discussed what efforts they should make to find these voices, particularly with the significant diversity gap in publishing. 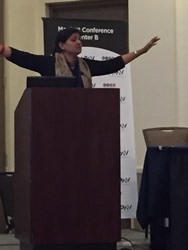 On Sunday afternoon the Marriott Conference Center was packed with people who were willing to stand around the walls to listen to Priyamvada Natarajan (right) share her research about dark holes and dark energy. Coming from India and traveling all over she was naturally interested in maps. Maps are always updated and refined and thus she was also interested in mapping the cosmos. She traced the history of maps and how scientific research has evolved. Her book is Mapping the Heavens: The Radical Scientific Ideas that Reveal the Cosmos. A prolific writer, she is a theoretical astrophysicist who literally creates maps of invisible matter in the universe. A professor in the Departments of Astronomy and Physics at Yale University, she not only explains the science but also shows how radical scientific theories gain acceptance. Her enthusiasm and focused energy kept the audience in total attention.

Pushpendra Mehta (left) is the author of The Suitable Inheritor, a novel that spans Chicago and Peru with an India connection. It is an inspiring story of true love, self-discovery, success, relationships, sacrifice, and support. He recently donated a copy of this book as well other books from his collection to the new South Asian Public Library. 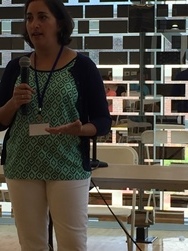 Portland, Oregon writer Asha Dornfest (right), author of Parent Hacks: 134 Genius Shortcuts for Life With Kids, shared how the book was inspired by the community that gathered around her blog, ParentHacks.com. A small intimate group shared their thoughts on motivating children to do their chores with or without financial rewards, and respecting children’s privacy as they get older (sometimes hard to do).

Ramanujan, the divinely inspired mathematics genius of the past century; a Japanese-American of our times trying to find himself; and the recent Hollywood film, The Man Who Knew Infinity—all came into a fascinating convergence in the presentation by Ken Ono, Asa Griggs Candler Professor of Mathematics at Emory University. Ono, after struggling with bouts of depression and lack of direction, had found meaning and inspiration from the life of Ramanujan, thanks to Ono’s father’s connection with this math genius.

Ono spoke of his life journey, a pilgrimage on which he found himself through mathematics. Ono’s parents were very strict, and demanded from him a singular focus on studies. He rebelled and wanted to drop out of high school… but just then Ono’s father received a letter from Janaki Ammal, widow of Srinivas Ramanujan, thanking him for his financial contribution towards a bust statue of Ramanujan. His father, who did not cry when his own parents passed away, cried on reading the letter.

He then told Ono about Ramanujan’s life, how he failed twice in college but became a genius in mathematics. Ono used this opportunity to drop out of high school to study Ramanujan’s notebook that was left behind when the acclaimed mathematician passed away at age 32. Still searching for direction, while flipping channels on TV, he saw a Nova special on PBS: Letters from an Indian Clerk—a documentary on Ramanujan. This was a turning point; he realized that he owed it to himself and his parents to focus on his studies.

He did his PhD thesis on Ramanujan’s work and his research won prizes. He was invited to the Institute of Advanced Study, where his father had started his career. Ono came to terms with his past, his parents’ past, and with his roots. At the White House President Bill Clinton gave him the Presidential Career Award. 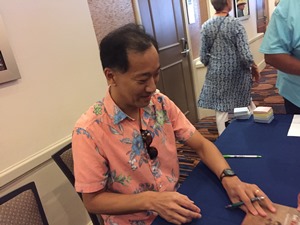 Mentors, and especially the spirit of Ramanujan had guided him and nurtured his life, and it culminated in My Search for Ramanujan, a memoir and biography co-authored by Ono. Not surprisingly, Ono (left) was sought out as a math consultant, and later as Associate Producer for the Dev Patel starring film, The Man Who Knew Infinity. Now Ono shares his life and his struggles with the world to encourage the value of hard work to succeed in life and to help hidden talents in mathematics to surface and be nurtured. He is Co-organizer of “In the Spirit of Ramanujan: A Global Mathematics Competition” and matches talent with mentors as both Ramanujan and Ono’s life and their work were nurtured by mentors. (For our interview with Ono,please see the feature article in this issue titled, “TheIdea of Ramanujan.”)

Ken Ono, professor at Emory University, examines one of the most brilliant mathematical minds with "MY SEARCH FOR RAMANUJAN: HOW I LEARNED TO COUNT"
Marriott Conference Center A presented by DeKalb Medical, Saturday, 11:15
https://www.decaturbookfestival.com/sessions/view/57606bbfa939303b35e5296c

Rumaan Alam with the novel "Rich and Pretty" in the Single Ladies and Friendship panel
Marriott Conference Center B presented by Atlanta Pro AV, Saturday, 4:15
https://www.decaturbookfestival.com/sessions/view/57606bc0a939303b35e52994

Sabaa Thair, was there in 2015, listed by AJC among the highlights of the festival
Teen Stage, Sunday, 12:00, Sabaa Tahir presents the highly anticipated sequel to "An Ember in the Ashes."
https://www.decaturbookfestival.com/sessions/view/575d97edf48cde3e2df5896e

Pushpendra Mehta of Atlanta with "The Suitable Inheritor" (a novel) that spans Chicago and Peru with an India connect.
Emerging Writers Stage, Sunday, 1:10
https://www.decaturbookfestival.com/sessions/view/5760695d8479bf3f35965bba

Sunil Yapa with "Your Heart Is a Muscle the Size of a Fist," a novel set amid the heated conflict of Seattle's 1999 WTO protests
Marriott Conference Center C, Sunday, 2:30
https://www.decaturbookfestival.com/sessions/view/57606bc2a939303b35e529b4

On Diversity in literature:
Junot Díaz on Facebook
September 15 ·
73.3% of characters in children's books are white; 12.5% of them are animals and trucks etc; 7.6% are African/African-American; 3.3 are Asian-Pacific-America, 2.4% of them are Latinx and 0.9 are First Nation. The lack of representation is stark. "We hope that this infographic, along with Lee & Low’s Diversity Gap blog posts, Debbie Reese’s blog American Indians in Children’s Literature, Edith Campbell and Zetta Elliott’s blogs, We Need Diverse Books, Reading While White, and other diversity initiatives, can help push forward important conversations and lead to real change in children’s literature publishing.