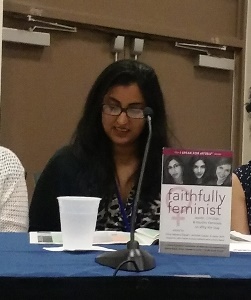 Aisha Saeed, second from left, served on a panel on religion and feminism as well as presenting her YA (young adult) novel, Written in the Stars. (Photo: Suman Naishadham)

The 2015 AJC Decatur Book Festival featured a host of South Asian writers, journalists, and poets who presented on a variety of topics ranging from the everyday effects of climate change in India, to narrative nonfiction, and diversity within the YA (young adult) genre.

On Saturday, September 5th, Pakistani-American writer Aisha Saeed served on a panel of women presenting the book, Faithfully Feminist: Jewish, Christian, and Muslim Feminists on Why We Stay. Saeed read an excerpt from her essay, which discusses the unforeseen effects that abandoning a career in law to be a stay-at-home mom had on her identity and the process of raising sons to be both feminist and Muslim in the 21st century.

Saeed described the difficulties of being a feminist Muslim and recalled stories from her upbringing in two worlds that are rarely viewed as overlapping. Answering the question of why she stayed, Saeed said, “I did leave. I stopped going to mosque but I also came back for the same reasons. If you leave, who’s going to change anything? The Islamic Society of North America has endorsed that women deserve more equality and rights in mosque. That’s only happening because there are women and men that believe in this and are fighting for this change. That’s why I stayed. If I leave, how will that happen?”

Later in the afternoon, award-winning environmental journalist Meera Subramaniam co-presented a panel titled Endangered Lands and Livelihoods, where she spoke about her first book, A River Runs Again: India’s Natural World in Crisis, from the Barren Cliffs of Rajasthan to the Farmlands of Karnataka. Local author Anjali Enjeti moderated the panel, which was held in Decatur First United Methodist Chapel.

Subramaniam’s book uses the five elements to tell five intimate stories of life in present-day India, with its myriad natural resource and population challenges. Subramaniam, who travelled throughout India as a Fulbright-Nehru senior research fellow, spoke of being constantly surprised by the people she met along the way and narrated the many ways in which ordinary Indians are acutely aware of climate change.

“The thing I loved was that I was astonished in both ways. Stories that I thought would be the ‘hopeful’ stories ended up being more troubling. Other ones, such as the 14-year-old brides in the poor state of Bihar, which I assumed would be terribly depressing, ended in me finding these amazing young women who are taking control of their lives.” 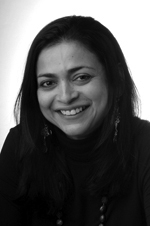 Saturday’s next panel of journalists, held in Decatur’s Old Courthouse, saw CNN reporter Moni Basu discuss the merits of narrative nonfiction in an industry that is traditionally tied to rigid standards of objectivity. Basu, now an enterprise reporter for CNN Digital, covered the Iraq War between 2002 and 2013 and won several awards for her reporting. On the subject of truth in journalism and defining narrative nonfiction, Basu explained to a packed audience the many ways in which truth is never quite absolute.

“Truth is always subjective in the kind of work we do. I can collect thousands of factoids for a story but I am still making a very human decision on which one of those to include…and which ones to leave out. By doing that, I’ve introduced subjectivity into the truth that you think you’re reading in that story.”

Basu, who serves as a faculty mentor for University of Georgia’s Master of Fine Arts (MFA) degree in Narrative Media Writing, also spoke about the program which trains midcareer journalists to write long-form, ‘factual literature.’

On Sunday, Pakistani-American YA authors Sabaa Tahir and Aisha Saeed (who was also on Saturday’s Faithfully Feminist panel) spoke to an energetic young crowd at the Faraway Lands panel about their upcoming novels, the characters that inspire them, and their hopes for diversity within the genre. Tahir’s novel, An Ember in the Ashes, is published by Razorbill Books, a division of Penguin Group. Saeed, who serves on the Executive Committee of the We Need Diverse Books (WNDB) campaign, spoke of her upcoming debut novel, Written in the Stars, whose Pakistani-American protagonist wrestles with the familiar themes of an arranged marriage and familial obligation.

“My hope is for people to be kinder and better to each other. The YA community is a great example of a group of people that are cool to each other,” Tahir said, when asked about their dreams for the future.

Saeed joked, “My biggest dream as a mother is to sleep for five hours straight.”

Sunday’s next event, Don’t Get Mad, Get Even! featured New York City-based writer and editor, Sona Charaipotra, who spoke of the debut YA novel that she co-wrote, Tiny Pretty Things. The novel takes place in an elite Manhattan ballet school and is a drama-packed story of a cutthroat world where girls do anything to rise to the top. Charaipotra spoke about her co-author’s intimate knowledge of the exclusive ballet world and the broader theme of bullying which the authors wished to address in their novel.

The book festival, in addition to these authors and journalists, featured local writers Reetika Nijhawan, who read from her book Kismetwali and Other Stories, poet and English professor Waqas Kwaja, and poet Mostafa Jalal, who is currently pursuing a PhD in poetry at Georgia State University. In conjunction with the book festival, author and former professor Sue Sehgal, spoke at a private event on preschool literacy. This brought the number of South Asian writers at this year’s AJC Decatur Book Festival to ten, the largest presence Atlanta audiences have seen in the festival’s ten years.

[The article above appears only on the website for ​September 2015, not in the September print/digital issues.] [Posted 9/16/15]