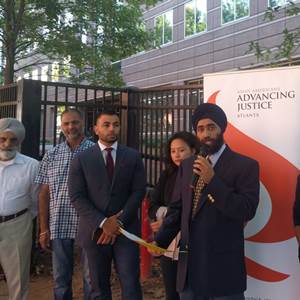 On June 26, 2018, Asian Americans Advancing Justice-Atlanta (AAAJ-Atlanta), advocates, and community members held a press conference to demand that the Atlanta ICE Field Office release individuals found to have credible asylum claims to their families and sponsors.

Migrants from India seeking protection from political persecution had begun their second hunger strike on June 17, 2018, joining the nation-wide movement of resistance against indefinite detention and inhumane deportation. By June 26, more than one hundred members of the Sikh, Hindu, and other South Asian communities in Folkston Detention Center had participated in the hunger strike over the previous two months.

According to AAAJ-Atlanta, the Atlanta ICE Field Office continued to deny fair and equal opportunities for these migrants fleeing persecution in obtaining legal representation to assist in their cases and was failing to unite them with their families, leading them to be detained for more than 6 months.

"South Asian asylum seekers escaped political and religious persecution and arrived in the U.S. seeking protections. ICE officials and this administration have used prolonged detention as a tactic to deter people from pursuing their asylum claims. They are on a hunger strike to protest their indefinite detention. We demand that ICE officials and detention officers stop any illegal act of of retaliation against the hunger strikers and release these individuals to their families and sponsors," said Van Huynh, Supervising Immigration Attorney at Asian Americans Advancing Justice-Atlanta.