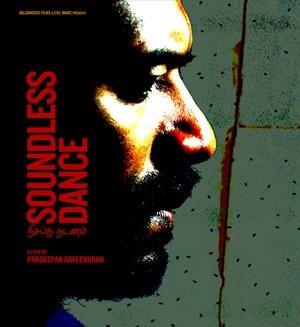 UPDATES, 5/14/19, 11/6/19: One of these films won the Best Documentary at the Atlanta Film Festival held in April, 2019 and is now shortlisted for the 2020 Academy Awards ! Also just racked up another win. (Guess what it was, then see addendum at bottom!)

The festival is a prestigious one: it is one of only two-dozen Academy Award® qualifying festivals in the U.S. It is also one of the largest and longest-running festivals in the country, with over 28,000 attending to see new independent, international, animated, documentary, and short films, selected from 8,000+ submissions from all over the world. It won Best Film Festival awards from Creative Loafing, Sunday Paper, 10Best and Atlanta Magazine.

Did it live up to the hype as far as the South Asian elements went? Yes, it did. Although there were not many desi films, what were there were excellent, as were others that had relatable themes.

From France/India/Sri Lanka, Soundless Dance directed by Pradeepan Raveendran (2019, Tamil/French, 89 minutes) was a painful look at the psychological effects of war on a young man. It was clear that his experiences both as a child and youth in the decades-long civil war in Sri Lanka and as an adult after leaving and living illegally in France searching for asylum and worrying about his family back home had given him PTSD as surely as if he had been wounded physically. His nervous breakdown was heart-wrenching. Sadly, only 11 people watched the film.

From United Kingdom/India, Kamali (photo: left) directed by Sasha Rainbow (23:43 minutes) was about a single mother fighting for her daughter’s empowerment in India through skateboarding—this after a month of Indian-Americans focusing on women’s empowerment.

From the U.S., Know Your Worth directed by Paras Chaudhari of re:imagine ATL (2018, English, 5:22 minutes) was a student music video on one aspect of empowerment.

From Bangladesh, Flight of the Unwanted (photo: below) directed by Atlanta’s Thomas Nybo and supported by UNICEF(2018, English, 05:40) was a virtual reality glimpse into the chaotic world of Rohingya refugees being forced from their homes in Myanmar into crowded refugee camps in Bangladesh.

From Afghanistan/France, A Thousand Girls Like Me (photo:right) directed by Sahra Mani (2018, Farsi, 90 minutes) followed a young woman’s obstinate battle to make her voice heard as she fought an uncaring judicial system to stop her father’s sexual abuse of his family. It could just as easily have been a story in Pakistan or India, both for the setting with street dogs, street vendors, etc., the customs of family life, and the topic of women’s rights. Actually, the response of the authorities to her efforts was the same as in the U.S. even recently: accusations of lying, and questions like “Why did you wait so long before telling?” Again, sadly, only 25 people saw this excellent film.

On to films that were not made by desis but that resonate strongly with desi themes—
Life Without Basketball (photo: left). Just as Sikhs have wanted to keep their beards while serving in the U.S. military, the young woman in this documentary, Bilqis Abdul-Qaadir, wanted to keep her hijab while playing basketball; she broke records but was stopped from playing professionally because of her hijab. Muslim women of various ethnicities have been restricted at work and in public places in the U.S. by regulations against wearing hijab.

Cultures collide in the rom-com Simple Wedding (photo: above) when a young Iranian-American woman is too modern for her traditional family. The director mentioned in the Q&A after the film that various aspects of the story were developed from the experiences of her Indian-American friend.

Differences in the attitudes of different generations in a Chinese-American family fill the tragicomic true storyline in a wonderful film called The Farewell (photo: above), in which the elders of the family follow Chinese custom in not telling the family matriarch that doctors expect her to die soon—while the young woman of the family, the granddaughter, struggles with the “white lie,” exclaiming that it is illegal in America! The film is based on an actual lie to a grandmother, who still does not know about it, said the director in the Q&A, since “she doesn’t watch movies”! The interviewer in the Q&A noted that he was very surprised at how much the film resonated with him culturally, although he was not Chinese: his family was Columbian, but the concept of the family itself being a main character in the film was familiar and strong. He also noted that any “dash-American” would understand the feelings of being “not American enough” and at the same time “not Chinese [or other ethnicity] enough.” The decision to go to the U.S. or stay in one’s own country was also explored.

Finally, a story about dealing with people who are “others”: You Are Here: A Come From Away Story (photo: left) documents the immense human kindness that the people of the little town of Gander, Newfoundland, Canada showed to the 7-10,000 stranded people who landed there suddenly in 30-some planes after the terrorist attacks on 9/11. Although the strangers were “come from aways” or “others,” the people of Gander also thought of themselves as immigrants, many having escaped across the sea from the Irish famine. And in the Q&A, the film’s director explained his motivation coming from his “gratitude for huge entities like Canada and the U.S. that took in [his] Jewish ancestors.” The film is gripping, since Americans remember well that horrific 9/11 day, but also since we also remember (more faintly) that we are almost all immigrants—and it gives us hope that kindness will win out over evil on one end of the spectrum and over the concept of “other” on the other end. The director blushed, receiving not one, but two heartfelt standing ovations.

Flight of the Unwanted - a 360 film of Rohingya Crisis
https://youtu.be/6QWczpgj8NE

Hot Docs 2018 Trailers: A Thousand Girls Like Me
https://youtu.be/3mGkQqK6DBU

You Are Here Trailer - A Come From Away Story
https://youtu.be/KYjtD-SBpFw

A short film titled 'Kamali' based on India's 9-year-old skateboarding sensation Kamali Moorthy and her mother has been shortlisted for the 2020 Academy Awards. The film revolves around Kamali's single mother Suganth and picturizes her struggles of bringing up her daughter.
The 9-year-old star caught the eye of the world with her impressive skateboarding skills. The film is directed by New Zealand filmmaker Sasha Rainbow. The 24-minute short film has also won the Best Documentary at the Atlanta Film Festival held in April.

11/6/19: Also won "Best Shorts, Spotlight: Living on the Edge" at the SCAD Savannah Film Festival.
[The article above is a Website Bonus Feature, appearing only on the website for May 2019, not in the print/digital issues.]