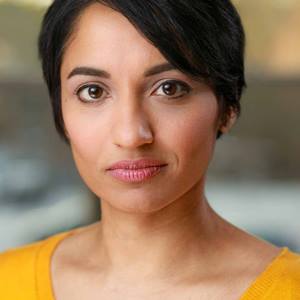 (Left) Amee Vyas, one of the founders of the Atlanta group, Unproducible Plays, as well as being one of the first Equity actors in Atlanta of Indian descent.

South Asians love the stage, it seems! Cultural programs are full of plays and skits as well as dance dramas. And some actors of South Asian heritage have brought their love of acting into mainstream theater. The past few years have seen a lot of discussion about the portrayal of Asian Americans, including South Asians, in films and TV. Well, another step is being taken in this discussion: in mainstream Atlanta theatre, South Asian thespians and others are talking about the challenges in bringing Asian stories to the stage, whether they be plays by Asian playwrights or plays with Asian characters.

Pam Joyce, one of the founders of Unproducible Plays.

Unproducible Plays is an Atlanta theater group started by three women, Pam Joyce, Michelle Pokopac, and Amee Vyas, to examine why scripts are labeled "unproducible" by producing organizations. For the past year, their focus has been on Asian plays and artists.

“We are gathering Atlanta artists, theatre companies, and engaged arts patrons to discuss the challenges in bringing Asian stories to the stage,” they say.

In November 2017, their production of The Art of Gaman by Dipika Guha had an overwhelming response, gathering six of the thirteen largest theaters in Atlanta, two universities, and over 70 guests. The highly acclaimed play was a Finalist in the Bay Area Playwrights Festival, Playwrights Foundation, 2016, as well as a Finalist for the Leah Ryan Prize, 2016.

“When Tomomi’s steamer pulls into San Francisco, her arrival coincides with the first wave of west coast Japanese internment. So when an old man on board offers to arrange her marriage to his son who lives in New York, Tomomi knows she must accept.

"Funny, intimate and deeply theatrical, The Art of Gaman is an account of one woman’s journey towards independence and self-expression through her life and American history”—the topics of both immigration and marriage are powerful.

Then on April 20, 2018, the group gave a staged reading of Orange by Aditi Kapil, as a fundraiser for producing this play in Atlanta. Orange is an adventure through Orange County told from the point of view of a young woman on the autism spectrum. Playwright Aditi Kapil is a writer, actress, and director, of Bulgarian and Indian descent, who was raised in Sweden. Her work is produced nationally and internationally.

Dramaturg Natasha Patel is a writer living in her native Atlanta. She has been a finalist for Glimmer Train's Short Story Award for New Writers, and her play Widowwood was a semi-finalist at the Bay Area Playwright's Festival.

The next presentations by Unproducible Plays are during “East by SouthEast: A Festival of Asian-American Voices” from August 5-7 at the Horizon Theater in Atlanta. Invited artists include Mala Bhattacharya (left), a voiceover artist and opera performer as well as an actor; Joy Bhowmick; Samah Maghjee; Tamil Periasamy (right), who graduated from Georgia Tech and became the first Atlanta Indian male (professional mainstream) actor; Sneha Raja; and Amee Vyas, one of the first Equity actors in Atlanta of Indian descent. As well as plays, including Widowwood by Natasha Patel (above, right), there will be Bengali songs, a Bollywood dance featuring Neeti Mehta, and 30-minute small-group discussions.

Our community is invited to join in this important conversation.