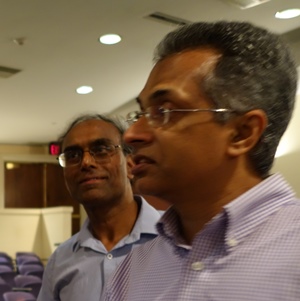 As Atlanta looks forward to the September AJC-Decatur Book Festival, the largest independent book fest in the nation, with its theme of #ReadDifferent, we can be glad that we have a wealth of Different to Read: this was proven on Sunday, August 16, 2015 at the Decatur Public Library when a great mix of young and old, male and female, black, white, and brown, straight and gay, came together to support South Asian writers and enjoy as they read from their essays, poems, short stories, novels, and plays in a myriad of accents and a dollop of Hindi. 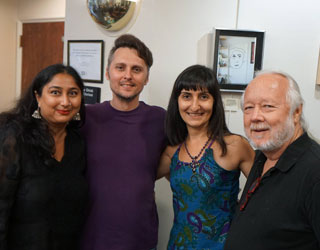 Organized by poet and psychotherapist Franklin Abbott, the reading was sponsored by Khabar magazine and the Special Collections in the archives of Georgia State University and highlighted a new GSU project to collect oral histories and supporting materials. Khabar has brought you news of projects at the Smithsonian Museum and elsewhere in the cover story “Our History, Our Stories” and in the essay by Franklin Abbott in which he describes his experience when GSU asked him to donate his papers—which sent him into a rewarding perusal of his “story.” As he says, there are “universal questions with answers that are unique to each person…Preserving our stories is of vital importance, both to those who are sharing their lives and those who, in the present and in the future, receive inspiration and solace from the stories that are passed along.” Atlanta participates in the national StoryCorps project, and now Morna Gerrard of GSU also offers training, equipment, and help in recording of oral histories. Consider also volunteering to interview or transcribe. 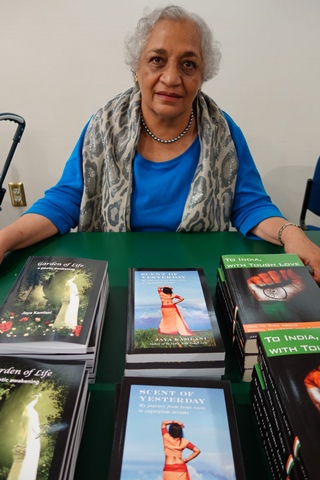 The feast of words began with Soniah Kamal reading a stupendous essay written in the wee hours of that morning. From pain and humor, her touching story concluded, “I may not be able to forgive and forget, but I’ll be able to forgive and accept.” Although Jaya Kamlani has researched economic development, corruption, and other social issues in her essays (To India, with Tough Love), she has also written a memoir and poetry and brought three of her books to sign. 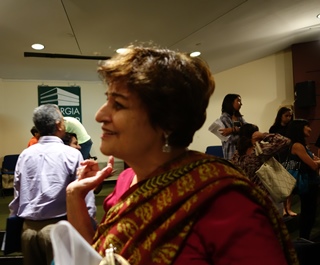 Khabar’s managing editor Murali Kamma often writes short stories and read from the quietly harrowing tale of an agnostic son getting in trouble at the burning ghats. Poet and short story writer Kamla Dutt, a professor at Morehouse School of Medicine, read in Hindi and English. Journalist Anjali Enjeti read from her piece on “Mixing Colors”: grateful for her mixed heritage, she learns that “culture isn’t genetic or biological. It is a choice, an aspiration, a deep-seeded appreciation of all of the distinct parts that make a person whole.” 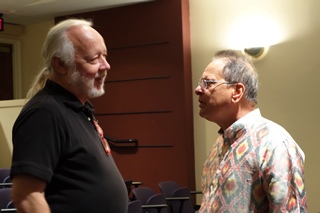 Moderator Ajay Vishwanathan also read, letting a sense of smell take him on flights of fancy. Scholar Dr. Bhagirath Majmudar took us from Ibsen into the mind of a woman leaving, to an Irish blessing. Khabar’s editor Parthiv Parekh read one of his editorials on the fullness of modern life. Agnes Scott professor of English and Postcolonial Literature, Waqas Khwaja, read his “poetry with a conscience, language with a heart, intellect shining through emotions” (—Deepika Bahri).

Dr. Uma Majmudar took us from the spiritual Gandhi through her humorous historical play (read with multiple voices) to the crazy pleasures and humorous pains of immigrant life. Finally Reetika K. Nijhawan took us to the streets of Delhi, considering that “those who have never known pity may someday become pitiless.” Long after the upstairs of the building was locked, the happy audience was still feeling the thrill of sharing with such gifted writers, and only left when the room went black.