COVID-19  In-depth info for Indians in Atlanta/Georgia. Click here
Home > Magazine > Around Town > South Asians at the AJC Decatur Book Festival tell of “seeing ourselves in each other’s faces” 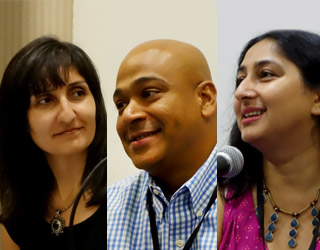 On Saturday, August 30, 2014, a large audience came to hear and ask questions as Soniah Kamal moderated a panel called “Everybody's Talking About It: Diversity in Children's and YA Books.” Then Ujjvala Bagal Rahn, co-owner of Mason-Dixon Publishing,spoke; she is writing a book about arsenic contamination of drinking water. A “Literary Fiction Panel: Pakistan, India, and the Diaspora” was a highlight (more on that later) with Soniah Kamal again (who is working on her second novel), Ajay Vishwanathan (his short story collection was recently published and he is working on his second novel), and Anjali Enjeti (moderator).

The next day Nandita Godbole, former ethnobotanist, now chef of Curry Cravings in Los Angeles and Atlanta, spoke about combining holistic eating principles with decadent dining, and Diya Chaudhuri, editor and poet from Georgia State University, was at the Poetry Stage—a total of nine South Asian authors this year!

Notes from the panel on fiction in Pakistan, India, and the Diaspora:
Book titles “should resonate with the author and encapsulate the main idea,” notes Soniah. Ajay chose From a Tilted Pail because “so many things can roll out of a tilted pail—bangles, marbles, or short stories.” He once heard a colleague direct him to “the keeper of lamps” and, fascinated by the phrase, wrote a story to go with it. Soniah’s family was split in Kashmir between India and Pakistan, so after growing up in England when the IRA was active and “everything was ‘an isolated incident,’” she thought, “Is everything An Isolated Incident [the title of Soniah’s novel], even though that’s what we call it?”

Favorite South Asian authors for Soniah are Bharati Mukherjee, Chitra Divakaruni, Moisin Hamid, and Khaled Hosseini’s The Kite Runner—Mistry’s A Fine Balance “should be required reading for everyone, the world over!” For Ajay, Moisin Hamid, Khaled Hosseini, Cambodian author Vaddey Ratner’s In the Shadow of the Banyan—“Pick up her book (along with mine!)—there is a tide of passion beneath those pages that lets me connect to the characters.”

Salman Rushdie and Bharati Mukherjee were the first popular South Asian-American authors, and others had received literary awards, but South Asians began to be really commercially popular with The Kite Runner. Authors must “try to understand the human heart—it is ubiquitous,” says Soniah, for “the more stories we read across the board, we can begin to see ourselves in each other’s faces.”

The trials and tribulations of publishing were discussed. South Asian authors used to be ‘exotic,’ but “I see a tremendous surge,” says Ajay, “because the media is reflecting a change in the [growing] audience.” Likes and tweets translate to awareness, which helps. A movement (#WeNeedDiverseBooks) especially to encourage children began on Twitter from a panel at a publishing convention and has generated interesting discussion. One Boston publisher has diverse stories, but other publishers still hesitate, laments Ajay—“like sitcoms with a token black person,” Soniah spears. “Small presses have sprung up and pick up diverse authors that big publishers might think would not bring in enough money,” she explains. A book has a chance of being published elsewhere, winning an award, and then being picked up by a Western press, as happened with Nayomi Munaweera’s Island of a Thousand Mirrors. The Hundred Foot Journey is a movie from a book written by an American with no connection to India but imagination—but would it have been picked up if it hadn’t been written by an American, asked Anjali, thinking also of Slumdog Millionaire and Gandhi.

An audience member asked about their paths to writing: Ajay was told by family to get a practical degree first, and the combination has worked for him. Soniah followed the prescribed course: get married, did that, have a child, did that, then writing! Social media has helped her, with readers from all over; India has literary history with a lot of support for authors there.

Another question was about style and content: Labels don’t matter, they agreed; some days you might feel like a cerebral book like The Red Violin, and other days want something silly. “If it caters to your taste on that day, it’s beautiful. There is a place for everyone.”

Soniah Kamal
1) Official Trailer. Sugar Mule: A Literary Magazine. Issue # 43 'NO PLACE LIKE HOME'
[What are you looking for? Where will you find it?]
Published on Apr 15, 2013
47 writers-- Indian, Pakistani, Bangladeshi and Sri Lankan-- contribute memoir, fiction and poetry to this one of a kind collection cutting across national boundaries, exploring borders and partitions and inviting readers to discover the dividing and unifying lines in their own lives.

Sandeep Jauhar
1) Sandeep Jauhar on NPR's Fresh Air
Published on Aug 20, 2014
http://brightsightgroup.com || Sandeep Jauhar's new memoir, Doctored: The Disillusionment of an American Physician, is about how doctors are growing increasingly discontent with their profession. And they're facing more pressures: As the number of patients they're expected to see increases, so does the amount of paperwork. While some doctors who perform a lot of procedures may be paid too much, he writes, many doctors, such as primary care physicians, aren't paid enough.
http://youtu.be/FFg82_Y1gKQ
2) https://www.decaturbookfestival.com/2014/authors/detail.php?id=722

Vijay Sheshadri
1) Poetry Reading at Simon's Rock [Bard College]
Published on Sep 11, 2014
Pulitzer Prize Winner Vijay Sheshadri kicked off the 2014 Simon's Rock Fall Poetry & Fiction Reading Series on September 4. Watch this video for exclusive footage of his reading, as well as the behind the scenes of his roundtable discussion with Simon's Rock students.
http://youtu.be/Kfwrj9PjUno
2) https://www.decaturbookfestival.com/2014/authors/detail.php?id=913