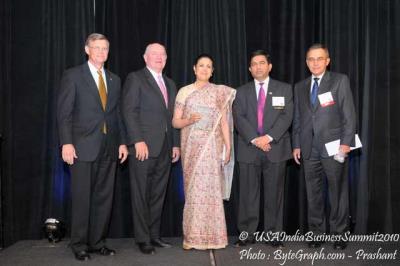 The first-ever USA-India Business Summit (UIBS) held on May 10 and 11 brought together dignitaries, business leaders and executives from both countries at the Cobb Galleria and Conference Center in Atlanta with the goal of “ Growing Business and Promoting Entrepreneurship.”

Ani Agnihotri, Program Chair, UIBS, started off the proceedings by greeting and thanking the State of Georgia, dignitaries, speakers, the organizing committee, the presenting partners and the sponsors. In his welcome remarks, Commissioner Stewart noted that the event was “connecting two vibrant economies and cultures.” He also commended Governor Purdue for Global Georgia, the state government’s campaign to encourage international investors to consider Georgia as a business location.

After expressing his delight in Georgia’s hosting the inaugural event, Governor Purdue referred to the commonality between India and Georgia, stating “ Georgia is the state of the future” and “ India is the nation of the future.”

“ Georgia and the United States share a dynamic relationship with India, and I am encouraged by the new global business opportunities for both countries that will result from this summit,” he said.

“ Atlanta has a special place in India,” Ambassador Shankar said in reference to the city being the birthplace of Dr. Martin Luther King, Jr., who was deeply influenced by Gandhian principles. She applauded India’s current growth rate and noted that India did comparatively well during the global recession. “We hope to grow and sustain the growth for the next three decades,” she said.

She added that while India had certain issues with infrastructure, it was also a business opportunity for investors, as noted by many other speakers at the event. She observed that the business growth opportunities extended to fields such as energy, biotech, engineering, agriculture, and services, along with information technology.

Suresh Kumar, the highest ranking Indian American serving in the Obama Administration, said, “President Obama deeply understands the importance of the U.S.’s relationship with India,” adding that everyone present gave meaning to the president’s statement that the U.S.-India relationship was one of the defining partnerships of the 21 st century. He talked about the National Export Initiative (NEI), which he described as “an unprecedented, comprehensive strategy aimed at doubling U.S. exports over five years, creating two million jobs in the process.”

“The NEI focuses on impacting three critical areas of international trade: trade promotion and advocacy; availability of credit and financing; and free and fair access to foreign markets. While the U.S and Foreign Commercial Service touches on all these elements, we are primarily responsible for strengthening the competitiveness of the U.S. industry by promoting U.S. exports, and providing commercial diplomacy and advocacy support for U.S. business interests around the world,” Kumar said.

He also noted that the U.S.-India trade relationship would continue to grow in the energy sector along with infrastructure, transportation, and health care, creating job growth in both countries. “Through the NEI, American businesses that want to export to India are going to have a more vigorous partner in the U.S. Government,” he concluded.

The plenary and panel sessions also provided an insight into an array of business opportunities, small, medium and large, for investors in the USA and India.

Other topics of discussion included “Success and Challenges for USA-India Business and Trade Relations,” “Entrepreneurial Ecosystem in USA and India and Exploring Business Horizons Together,” and “Manufacturing, Supply Chain and Logistics.”

The underlying theme of the summit seemed to be that India has arrived and is here to stay, empowered by its youth, manpower, educational value system, rise of the middle class, and advancements and innovations in technology.

Deepak Jolly, VP Public Affairs and Communication of Coca-Cola India and SW Asia, noted, “Liberalization and early reforms were instrumental in turning around the Indian economy.” Koti (KRL) Narasimham, Executive VP and Country Manager USA of Larsen and Toubro Ltd, recalled the times when the Indian government restricted the issue of licenses to 350 escalators per year. Surely India had come a long way since then, he said. Most speakers commended the explosive growth of the telecom industry in India and agreed that India’s growth was encouraging and sustainable.

UIBS 2010 was organized by Georgia Tech’s CIBER; USA India Initiatives, Inc. (USIII) and USIBRC with support from the Georgia Department of Economic Development, the Metro Atlanta Chamber of Commerce, U.S. Commercial Service of the United States of America and the Department of Commerce, Lufthansa German Airlines, CII India Business Forum, the Technology Association of Georgia, WE, and a host of sponsoring organizations.

The topics were different but the voices were unified in their message that USA , the largest economic power, and India, one of the fastest growing economies in the world, had immense business prospects for small, medium and large scale investments across both countries in various fields, supported by the governments of each country. With 380 attendees from both days of the event, the inaugural UIBS 2010 successfully provided a platform for business enthusiasts to explore opportunities in both countries.