Spectacular Ganesh Chaturthi Celebrations at the Hindu Temple of Atlanta 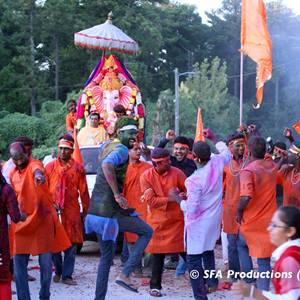 The Hindu Temple of Atlanta in Riverdale, Georgia, (HTA) organized a spectacular Ganesh Utsav celebration from September 3 to 11, 2016, which attracted hundreds of devotees from Atlanta and places as far as Arizona, Pennsylvania, and Florida. A majestic ten-foot Ganapathi idol was again specially made in Hyderabad for HTA and installed in the specially built canopy in the forecourt of the Shiva temple.

Ganesh Utsav celebrations began with Sankusthapana in the Balaji temple and Kalash Pooja in the Shiva temple. A platform under the canopy was an ideal setting for the dazzling idol of Lord Ganesh, resplendent with rich adornments, artistic décor, and lavish fresh vegetables, flowers, and fruit garlands.

Through the nine-day Utsav, elaborate rituals and archanas were perfromed, and shlokas and Ganesha mantras were chanted by eight priests.

On the second day, a Ganesha-making workshop was held for kids. HTA supplied materials and instructions to over 1,500 families and kids to make about 2,000 environmentally friendly clay Ganeshas. Families enjoyed a day of designing and creating their very own personal Ganeshas. A puja for these handmade Ganeshas was performed in the mandap later. 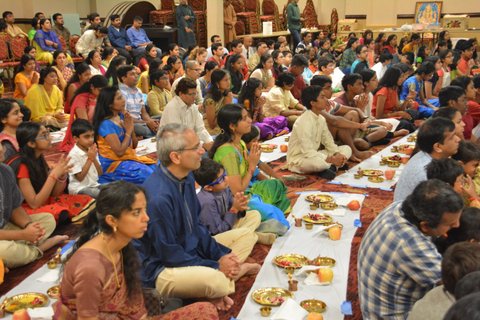 On the second Sunday, 9/11, BalaVihar children at HTA performed Shri Ganesha Puja under the guidance of Acharya Geetha Raghu. The puja began with a moment of silence in honor of those who lost their lives on September 11, 2001. HTA provided laddu and vada for naivedyam, and parents brought Ganesha’s favorite food, modakam. At the end, Chief Priest Srinivasan Sarma performed Mangala Aarathi and blessed the children. 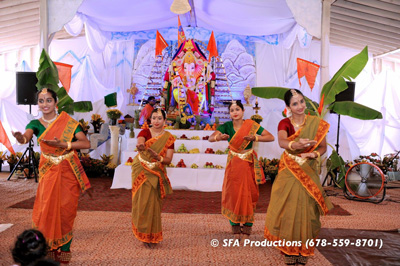 One of the cultural programs. (Photo: SFA Productions)

At night, the Telugu Association of North America (TANA) lit up the skies with dazzling fireworks. Many Indian organizations volunteered and provided cultural performances lasting daily for about 12 hours. Vikas Anand Goyal and Vaisheshi Jalajam emceed with verve.

Saturday, September 10 was marked with nonstop entertainment and spiritual fervor. Hundreds of devotees and visitors participated in the preculmination of the nine-day celebration with a grand Ganesh Nimajjanam ceremony.

Bidding during the auction of laddus. (Photo: SFA Productions)

Temple chefs Ramakrishna and Srinivasan had prepared three big laddus (Ganeshji’s favorite!). A lively, exuberant auction was conducted by Vikas Goyal and the laddus were sold to the highest bidders, Dr. Supriti Balyan, Ramesh, and a third bidder who remains anonymous.

All this was followed with exciting matka-breaking by kids and adults. In the evening, a huge procession around the temple was accompanied by live music. It was exciting to watch a shower of flower petals from a helicopter! Maha Mangala Aarathi was performed reverently to the beating of the drums and traditional nadaswaram music every day. The HTA kitchen under Sairam Surapaneni provided food to all thrice daily.

Finally it was time to bid farewell to much-loved Ganesh. Enthusiastic young devotees came out of the canopy, dancing and shouting “Ganapati Bappa Morya” to the pulsating beat of dhols as Lord Ganeshji’s idol was placed in a truck, which was followed by a bus with about 50 devotees. The Ganesh Visarjan ceremony was performed in Savannah, with joyous shouts and wishes for his return the following year. As they say, “with the immersion ceremony, the Form (physical) returned to the Formless (spiritual).” The Ganapati idol became one with the water.

HTA President Dr. P. B. Rao thanked all and looked forward to next year’s celebrations.

Thanks:
HTA President Dr. P. B. Rao personally and on behalf of the Executive Committee and Board of Trustees thanked everybody that participated in this year’s festivities, and commented, “We are highly indebted to countless volunteers and their families for the stage decorations, Photography by ByteGraph, Vakiti Creations, SFA Productions, Swaroop Kolachina, Tejesh, KalaAkriti, etc. We would also like to thank Nate Natesan for Swacch Devalaya.

The executive committee and management of HTA are deeply appreciative of Jagan Mohan Rao and Ravi Chander, chief coordinators of the festivities. Aravind Goli (Puja committee chairperson) along with the Temple priests ably coordinated this year’s rituals and deity decorations. We are highly indebted to countless volunteers and their families in particular for devoting countless hours in spite of their busy schedules, to make the celebrations a grand success.

The celebrations could not have been possible without the office staff and volunteers. We also beg the forgiveness of every one for any lapses and shortcomings and will make every effort to rectify them in the celebrations of next year.”