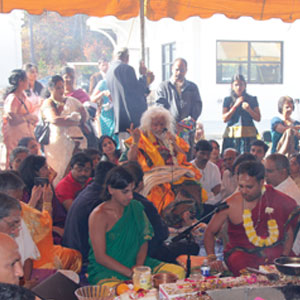 The Hindu Temple of Atlanta organized a spiritually suffused, ritual-studded Sri Lalitha Koti Nama Parayana celebration on a bright sunny Sunday, November 6, 2011. Sri Viswayogi Viswamji Maharaj, who is on a U.S. tour and is currently in Atlanta, presided. Thousands of devotees and visitors from all over the Southeast thronged the temple from as early as 6:30 a.m. to offer their prayers, witness the rich spectacle and relish the delicious maha-prasadam (food offered to God and shared).

The idea of Sri Lalitha Koti Nama Parayana was conceived about six months ago. On the evening of September 27, the Siva Temple resonated with Sri Lalitha Sahasranama Parayana by over 300 ardent devotees. During the following forty days Laksh Kumkumarchana was offered to Parvaathavardhini. From 14th October onwards, Lalitha Sahasranama Homam and Tarpanam were conducted on every Saturday.

The climax came on Sunday, November 6. A huge tent was erected on the temple foreground under which volunteers set up homa-kundas (square brick hearths) and colorful displays with an artistic blend of fruits, flowers, and other puja accessories .After preliminary puja, Sri Lalitha Sahasranama commenced at nine homa-kundas. The temple’s resident priests, along with about one hundred devotees, assisted by volunteers who continuously replenished the homam (ritual) offerings, conducted homams four times, chanting Vedic shlokas, in front of the consecrated fires. Simultaneously, tarpanams (ancestor blessings) were conducted in yagasala (ritual enclosure). The homams concluded with Rudrahomam and Parivar Devtha Homams.

At 11:30 a.m. the venerable Sri Viswayogi Viswamji Maharaj with a radiant smile was given a rousing reception, with a purnakumbham (earthen pot). Swamiji was escorted inside where he offered his prayers and blessed his devotees. He was courteously seated on an ornate seat and greeted with an impressive guru puja.

Swamiji is known for his selfless service, compassion and unreserved love for all. Born in Guntur, Andhra Pradesh, he is a spiritual humanist, spreading the message of universal integration, peace, love and fraternity and of helping the poor and neglected members of the community

Swamiji blessed the parayana (recitation) and delivered his brief spiritual discourse, just before purnahuti (complete offering). He said that the temples, besides being energy centers where people can come to re-energize themselves through worship and darshan, should now become centers to propagate ‘Sanathana Dharma.’ The eternal values of our dharma are universal, and everyone, irrespective of their religion or nationality can benefit from them. Mutual love, respect and peaceful coexistence are most essential. Mathrudevo bhava and pithrudevo bhava (honor your mother and father as God) are the very first declarations of Sanathana Dharma. All sadhana (practice) and worship will be fruitless if we do not respect and take care of our parents. He emphasized that one must keep all five mothers happy: universal mother, mother earth, mother nation, biological mother, and mother cow. “Let us make the mother planet an abode of peace. Natural calamities are caused by an imbalance in five elements: earth, water, fire, air and space. So let us strive to prevent pollution of the environment and promote our physical wellbeing through healthy lifestyle.”

After Maha Purnahuthi, Prakara Utsavam was done around the temple. The devotees carried the kalasams while circumambulating and then carried them inside the temple. Abhishekam was conducted with all the sanctified water from the kalasams. Suvasini Puja, Kanyaka Puja, and DampathiPuja were done. Maha Mangala Aarathi (song) was followed with delicious teertha prasadam (holy water) served to all.

The day concluded with Uma Maheswara Kalyanam (God in married state). All who attended received the blessings of Sri Mata. The original plan and commitment was for parayana one crore times, but the final count exceeded four and half crores.

HTA President Jayasree Moparthy commented, “This puja sankalpam (recitation) for world peace was conceived long time ago by Mrs. Kusuma Kotte…. My special thanks to Mr. Ravi Ponangi (India Tribune), B.K. Mohan, and Ravi Penumarthy for media coverage, for photography services and for web-broadcasting of the celebrations for people who couldn’t attend in person.”

The festivities were truly awe-inspiring. Through such spectacular festivities, the iconic Hindu Temple is undoubtedly enriching the religious diversity and promoting an international and multicultural image of Georgia.