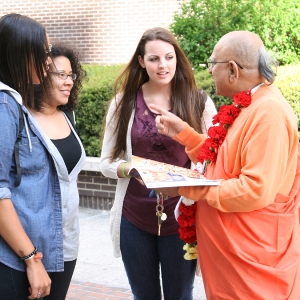 Two major universities in Georgia were mesmerized by the breeze of spirituality when the Gaudiya Vaishnava Association conducted its "Spirituality in Spring" program for the benefit of the student population. His Divine Grace B.S. Tirtha Maharaj, Founder Acharya of Gaudiya Vaishnava Association was in Atlanta during April and May 2013. An author of books, CDs, and DVDs in English, Hindi, Tamil and Bengali and a foremost speaker of Bakthi Yoga and preacher of Vedic scriptures, Shrila Maharaj spoke of the purpose of human life, the nature of the soul, God consciousness, and Bakthi yoga. 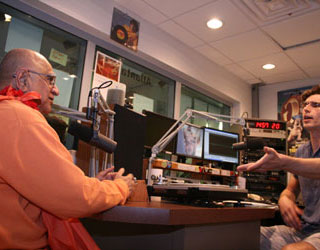 Georgia State University's (GSU) Public Affairs Radio Station, WRAS Atlanta 88.5 FM, invited Shrila Maharaj on the 18th of April to speak about Indian Vedic wisdom and Krishna Consciousness. News Director Nathan Klim interviewed Shrila Maharaj for broadcast over the air and on the internet as part of "The Hub" program. Shrila Maharaj explained that Gaudiya Vaishnavas belong to the monotheistic sect of Hinduism (Vaishnavism) following the age old Vedas and believe in a personal God. Discussing similarities and differences between Christianity and Vaishnavism, he clarified that the former believes that only human beings possess soul whereas the latter believes all living beings including animals, birds, plants, and insects have spirit soul. He rejected Darwin's theory of evolution. He highlighted the main teachings of the Vedas that we are spirit, not body, part of the supreme spirit soul, and only in the human form of life has God given us highly evolved consciousness to realize Him. Shrila Maharaj noted that India is sadly becoming more materially opulent and at the same time is spiritually degrading.

On Apr. 27th Shrila Maharaj was invited to the University of Georgia (UGA) at Athens by the Indian Student Association and Indian Association of Greater Athens. He appreciated the crowd's interest in spiritual talks, since these days the world has become addicted to cell phones, computers, and television, which rob people of spirituality. Suffering is also due to the false idea that 'I am the body,' so he elaborately explained the gross and subtle bodies and the 8,400,000 varieties of living beings present in the universe as stated in the Vedas. He noted that people don't understand where they come from, what happens after death, why we grow old, etc. To find answers to these is our only business as human beings, he said. He detailed the six stages of transformation a body undergoes in one lifetime and how the spirit soul is never born and never dies. Due to poor fund of spiritual knowledge the mind is always agitated and in reality the mind is the enjoyer of the senses, not the sense organs, he said. He mentioned the benefit of chanting the holy names of Lord Krishna or Vishnu. A question-and-answer session and distribution of the Bhagavat Vani magazine followed.

Every day between Apr.14th and 30th, Shrila Maharaj gave discourses from the Shrimad Bhagavatam in the Alpharetta area. Seekers from Alabama, Tennessee, and Kansas and visitors from India also attended the programs. Shrila Maharaj spoke the 3rd Canto giving detailed explanations about creation, Brahma's manifestation, calculation of time from the atom, microcosmic and macrocosmic time, and more. Krishna prasadam was served after morning and evening programs.