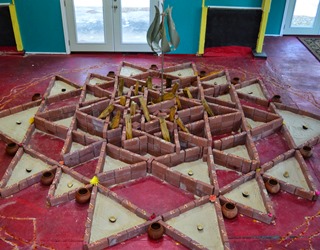 For the first time in the USA, a small group of Vedic believers called Vedas US performed Sri Chakra Rajam Maha Yagnya in McDonough, Georgia, in the Atlanta area. Vedas US members do research in vedas, related shastras, and yagnyas and have performed various yagnyas over the last few years. On the auspicious occasion of Chaitra Suddha Purnami on April 04, 2015, this ritual was performed under the leadership of Venkata Ramana and Nalini Chaganti along with six other families. Because of the lunar eclipse on that day, the homam commenced at 1 p.m.

This yagnya (ritual of the sacred fire) is one of the oldest and rarest of all. Since it requires much care, few people perform it, even in India. While it took over three hours to perform, the seven families spent over two weeks in constructing the kundam (altar) to make sure they correctly represented the Sri Yantra (sacred instrument, also Sri Chakra, a diagram formed by nine interlocking triangles that surround and radiate out from the central bindu point). Important features of this yagnya are these: 43 Yagnya Kundas in a triangle form are constructed to form the shape of Sri Chakra; There are 7 layers in which this yagnya is performed; Structure of the universe is hidden in the Sri Chakra; Mantras are chanted describing the creation of the universe; God is praised as Para Sakthi or Adi Sakthi in this yagnya; All 14 worlds from Patalam to Brahma Lokam are described; and Beejaakshara Mantras are chanted throughout to sanctify. 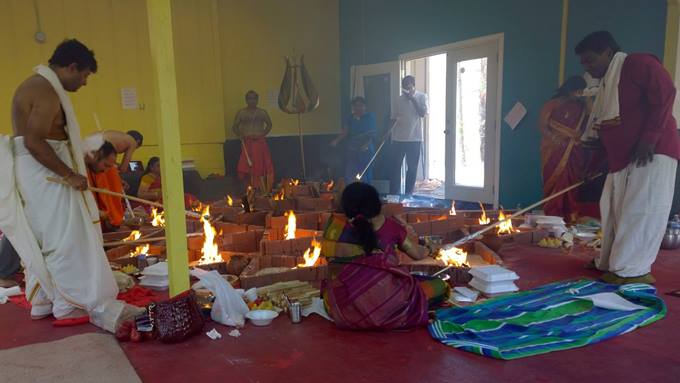 The 3 dimensional Sri Chakra Rajam’s Yagnya Kundam, which represents the method in which God’s creation took place, consists of 9 main chakras, yonis, or enclosures in the form of triangles with five layers that generate 43 more triangles with the arrangement of the nine triangles.

YagnyaProcedure
The mantra of Sri Chakra Rajam is significantly called Beeja (Seed) chakra with the worship done mainly with Beeja letters (Aum (OM), I’M (I eem), Hrim (Hreem), Srim (Sreem), Klim (Kleem)). These Beeja letters are chanted carefully lead by Hotha Shri Shastry Munnagala and the Saptha-Hothas (Seven couples who participated). These letters were chanted with (3-1-4) rhythm. And after every chant of the Beeja Mantra, Ved Manthras from different Sukthas were chanted by Brahma Shri Venkata Chaganti. Adhvaryu Shri Suresh K. Volam has got the Gharhapatya Agni from the main Purohit Shri Vishwamitra Chaganti and proceeded to light the Gharhapatya and Avahaniya Agnis. Dakshinnagni was led by Hotha Shri Sai Ram Karumanchi and Sambyagni was led by Hotha Shri Giri Kandala. Agneyagni and Vayavyagni were led by Hothas Shri Neelam Srinivas and Hotha Shri Chandramohan Pamidimarri respectively.