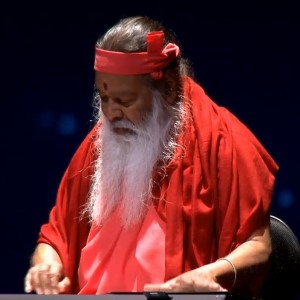 His Holiness Sri Ganapathi Sachchidananda Swami ji’s 3-day stay in Atlanta from July 12-14, 2019 was a hectic one. On his 156th world tour he was traveling to Houston, Washington D.C., Atlanta, Chicago, and Seattle. The Datta Yoga Center (DYC) in Atlanta organized a series of events where social workers, community leaders, businessmen, professionals, students, spiritual seekers, and more had the opportunity to listen to Swami ji and to speak to him one-on-one. DYC is the American branch of Avadhoota Datta Peetham, Mysore, India which was established by Swami ji in 1986 to foster unity, peace, and spiritual/religious fulfillment of humanity through ancient teachings.

In the evening of Friday, July 12, bhajan sandhya (Divyanama sankeertana and discourse) was organized at Swaminarayan Gurukul. Swami ji exhorted devotees to talk to their children in their mother tongue and to teach them their mother tongue, culture, customs, festivals, and heritage. He commended NRIs for their love of their motherland and blessed the gathering. Since Sayana Ekadasi was on July 12, he spoke of its importance, emphasizing that mere fasting is not the goal of the auspicious day. Sayana Ekadasi (“sleeping eleventh”) refers to Lord Vishnu closing His eyes. Swami ji sang various bhajans, including the Marathi abhang “Pandari nivasa, Sakha Panduranga.” 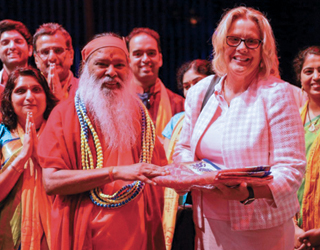 On Saturday morning, group Lakshminarayana Kalyanam was performed in Swaminarayan Gurukul by married couples. In the evening, a “music for meditation and healing” concert, “Swara Sudha Raga Sagara Concert,” was held at Infinite Energy Center, Duluth. Georgia State Senator Ms. Renee Unterman welcoming the Swami ji with a garland and was gifted a sari. This was Swami ji’s second concert in Atlanta, after the initial Nada Prasara concert in April 1993 drew more than 1,000 attendees.

On Sunday, Swami ji performed Sri Chakra Puja at Swaminarayan Gurukul. Swami ji stressed that all should sing at least bhajans; the singing ability is refined when coupled with devotion. Swami ji commended Dr. Prasad Garimella and his team for bringing him back to Atlanta after 26 years. Attendees could get his blessings and receive prasad from him.

The concert in more detail:

Sri Ganapathi Sachchidananda Swami ji is known for his meditation and healing music and for promoting the ancient Vedic traditions. He spreads the message of universal love, advocates comprehensive synthesis of all paths, and stresses the value of serving humankind.

Swami ji introduced the ancient technique Raga Ragini Vidya before the concert began. He explained that the healing music played is closely related to herbal medicine, astrology, gemology (Mani Shastra), and yoga. He recommended the audience to sleep during the concert, as the vibrations work better to heal the body when the mind is not calculating and analyzing the music.

The giant screen behind Pujya Swami ji lists ragas that were played during Swara Sudha Raga Sagara in Atlanta on July 13, 2019.

The concert began with Swami ji playing Raga Rushyaketupriya (Pranava Swarupam). He continued to Raga Vagadheeshwari (Dasoham), and Swara Sudha Raga Sagara consisting of the three main ragas: Raga Kashyapi (Mayatita Patu Mam), Raga Yogini (Vande Shivam), and Raga Mayamamalavagowla (Kasi Kasi). Before the final raga, Mayamalavagowla, he described the upcoming raga’s effect on all nerve systems through its range of soothing to harsh sounds. He played solo for almost twenty minutes before the musicians joined in to conclude the raga. In a meditative state, he held healing crystals to the audience for many minutes during this time. After tani avarthanam by the percussionists, Raga Dheerasankarabharanam (Happy Tune) and Raga Sama (Raga Ragini Devi Mangalam) were played to conclude the evening. The large crowd cheered and applauded as Swami ji asked if they were happy! 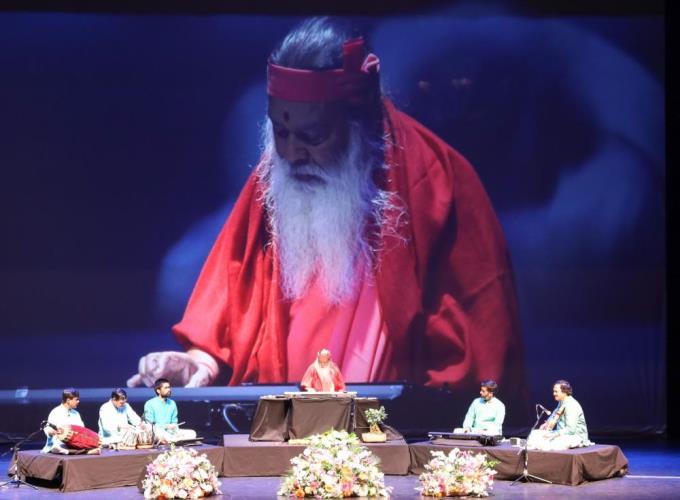 Raga Chikitsa means healing through the use of raga (melodies). Swami ji explained that his method of healing through music is a lost ancient art that he is reviving. He relates Carnatic ragas with the five elements of nature (Pancha Bhootas). He says, “Music is considered as an Upaveda, the Gandharva Veda in addition to Dhanurveda, Ayurveda, and Artha Shastra.”

Sri Swami ji has been performing ​meditation and ​healing concerts in prestigious concert halls all over the world for over three decades and has received numerous awards and honors. These concerts promote harmony and focus on bringing inner tranquility and peace. 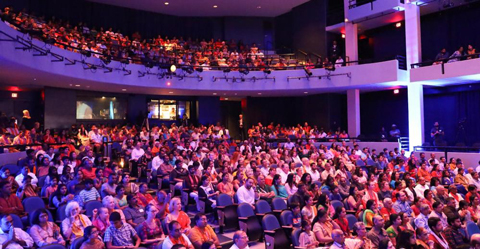