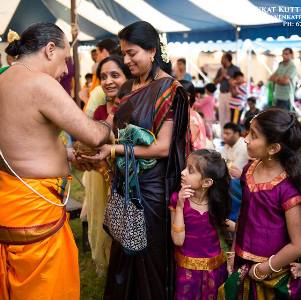 “Alpharetta and all the devotees who attended the event are really blessed to witness this celestial wedding.” This was the feeling as more than 3000 people participated in the Sri Sita Rama Kalyanam organized by The Hanuman Mandir on the most auspicious day of Sri Rama Navami. Festival celebrations started on New Year’s Day, Ugadhi or Gudi Padwa, March 31, 2014 and went on for nine days (Vasantha Navarathri) culminating in the grand Kalyanothsavam on April 8. Each of these days was observed with a specific homam (Sri Rama Naama, Manyu Sukta, Garuda, Hayagriva, Lakshmi Narayana, Sudarsana, Maha Sudarsana Narasimha, Narasimha), ishti and paarayanam. The temple head priest Sri Srimannarayana Swami and Sriman Laxman Swami worked to make this festival a truly divine experience for the entire congregation. The last four days of the festival witnessed special events where students and teachers from several traditional dance schools performed, much to the delight of hundreds of devotees. Carnatic musicians and bhajan groups from around North Atlanta also sang for the pleasure of their dearest lordships. Pallaki uthsavam (palanquin procession) was celebrated in the premises of the temple on Sunday April 6. Hundreds participated, singing the glories of Lord Rama and Mother Sita, and danced in ecstasy where Lord Rama was carried on the palanquin. It looked as if Sri Rama had come to Alpharetta from Ayodhya to bless his devotees.

The best of the festival was on the last day when the divine couple Rama and Sita were brought together in the celestial wedding for Loka Kalyana Praapthi. The nine day havan was concluded with Maha Purnahuti. Performing kalyanam of Sri Sita and Rama on the appearance day of Sri Rama (Navami) has been a centuries old tradition in South India especially, originating from the holy place Bhadrachalam which is considered Dakshina Ayodhya (Ayodhya of the South). Tents in the yard accommodated fifteen hundred devotees, but the entire area was full in no time. First came chanting of Jai Siya Ram, then darshan of their lordships. Special seating arrangements were made for senior citizens and handicapped. In authentic Vedic style, sacred wedding mantras were chanted. Atlanta’s most senior priests Sri Seshavataram Swami and Sri Rangachary Swami led from the front performing rituals while temple priest Sri Srimannarayana Swami narrated the significance of each ritual to the audience. Sri Laxman Swami recited the mantras with utmost devotion. Devotees chanted loudly the names Govinda Govinda at the end of each ritual. As one devotee stated, “It was an ecstatic feeling to be there. … We could not lift our eyes from the alankaram. Mantra vibration really made us forget the mundane world. This will stay vivid in my memory forever.” The wedding was followed by Samrajya Pattabhishekam, the coronation of Sri Sita and Rama as the emperors of the entire universe. Everybody welcomed the lordships into their hearts and surrendered themselves unto their lotus feet. This is the real saranaagathi as preached by our ancient scriptures and sages of all sampradaayas. 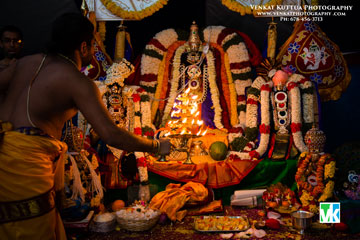 One devotee, a regular visitor to Tirumala Tirupati, fondly remembered her experiences and drew a comparison: “I have had the privilege of attending many kalyanotsavams at Thirupati. Yesterday’s, kalyanotsavam-pattabhishekam at Hanuman Mandir was done with equal fervor and much greater enthusiasm than any others I have witnessed. Felt totally blessed to be part of such tradition and grandeur. Truly celestial! Thank you.”

When the organizers were feeling overwhelmed, looking at the thousands of visiting devotees, several young devotees came forward voluntarily to assist in the food distribution, seating control, and clean up. This is when it was understood that the event was truly organized, controlled, blessed, and accepted by Sri Rama Chandra Swami and Srimati Sita Devi and sent Rama sena. Dinner prasadam was prepared entirely by Sri Madhuri Puranam ji. Alpharetta Police estimated the crowd to be more than 3500 and the traffic control was truly a herculean task. The board sincerely thanked all assistant priests, sponsors, trustees, dance schools, musicians, volunteers, and devotees. As one devotees remarked, “The Rama Navami function had the performance outdoor in pandals (tents), like we see in India. Very nice atmosphere.”