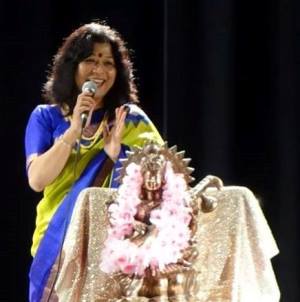 Surabhi School of Music and Art held their student recital on Sunday, May 21, 2017 at the North Gwinnett High School auditorium. The recital began with two group songs where all students of Surabhi joined in, “Sharan mein aayi hai” and “Ho yehi ujjal sa man mein.” These were followed by individual students and small groups presenting compositions in various ragas, which included Bilawal, Yaman, Khamaj, Kedar, Bhupali, Kamod, Behag, Miya Malhar, as well as well-known bhajans and a Rabindrasangeet. Debasri Dutta, the director and principal music teacher of the school, accompanied the students on harmonium with Atlanta musicians Byasdeb Saha on tabla and Amitava Sen on violin.

A couple of students then presented songs on keyboards, and a couple of students sang Bollywood songs. The closing performance was by Debasri Dutta, singing a composition in Raga Desh, followed by a Haveli Sangeet, a semi classical form often considered a precursor to dhrupad.

The program was emceed by Baisakhi Mukherjee and Rupa Hazra and concluded with all performers being presented with token awards, and Debasri Dutta was felicitated.

Debasri Dutta and her students, with musicians and emcees after a successful recital.
(Photo: Joyjit Mukherjee )