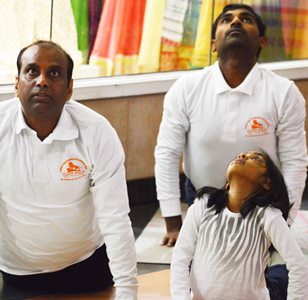 (Left) HSS GA Volunteers doing one of the postures of the Surya Namaskar.

Hindu Swayamsevak Sangh USA (HSS) held its tenth “Yoga for Health, Health for Humanity Yogathon” or “Surya Namaskar Yajna” from Makar Sankranti to Rathasapthami—this year from January 14 to 29, 2017. The annual 16-day event aims to create awareness about yoga and its advantages in achieving a healthy body, mind, and spirit. US Representative Bill Foster (D-IL) brought it to the attention of Congress that week. In Atlanta, HSS Georgia Chapter brought a “Flash Mob” style Surya Namaskar demo to the public at Global Mall on Saturday, January 21 from 1pm to 2 pm. 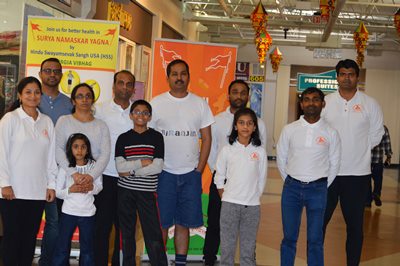 Each year Hindus worldwide celebrate January 14th as Makar Sankranti, a day that marks the change of season as the sun enters the sign of Capricorn or Makar. Makar Sankranti ushers in longer days; thus, the festivity symbolizes sunshine in life. To mark this occasion, HSS holds its “Sun Salutation” Yogathon.

Surya Namaskar integrates simple Yoga postures in 10 steps that, along with easy breathing technique, can provide immense health benefits to both the body and the mind. HSS GA Volunteers enjoyed demonstrating these steps with background music specifically made for the postures, playing on the PA system. A crowd gathered to watch and took further information after the demo. The unique presentation was appreciated and garnered compliments. For information on metro Atlanta’s 7 chapters, email muraliknair19@gmail.com 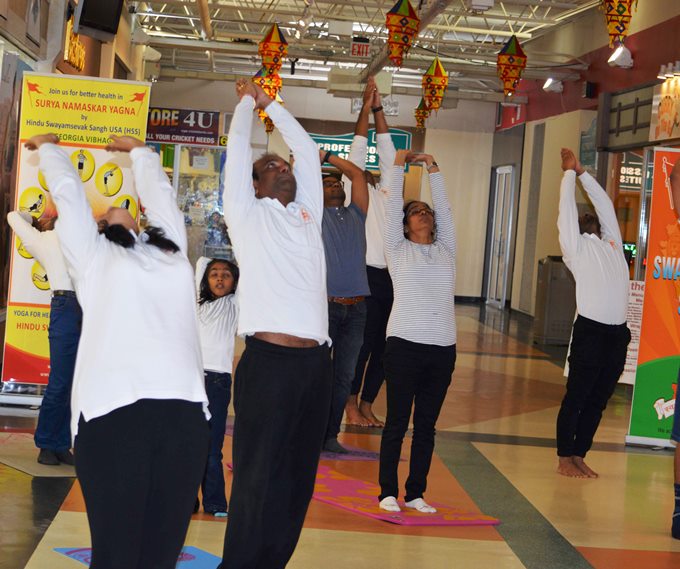