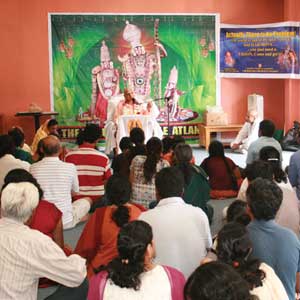 His Divine Grace Swami B.S. Tirtha Maharaj, Founder Acharya of the Gaudiya Vaishnava Association (GVA) was in Atlanta between May 3rd and May 13th. During the eleven days of his stay Shrila Maharaj delivered discourses on Shrimad Bhagavatam, the cream of all Vedic literatures, and Shri Isopanishad every evening in the Cumming area. Shrila Maharaj spoke about Emperor Parikshit, a great devotee of Lord Shri Krishna, who ruled the entire world, and how after being cursed he was delivered by Shrila Sukadeva Goswami. Shrila Maharaj spoke on Shri Isopanishad, which is part of the Yajur veda, wherein he emphasized the fact that the Lord has a sat-chit-ananda form. 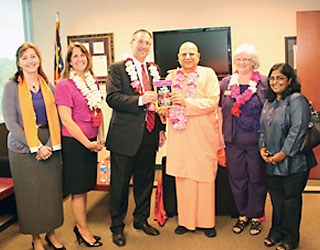 Prior to his Atlanta visit, Shrila Maharaj visited places in Texas, Arizona, New Jersey and Connecticut to deliver a series of lectures on Bhakti Yoga (devotional). He also tells Hari Katha. For more information on Shrila Maharaj or GVA lectures and classes, email usa@gva.in or call 1-888-948-2872.

Prahlāda Mahārāja continued: One may possess wealth, an aristocratic family, beauty, austerity, education, sensory expertise, luster, influence, physical strength, diligence, intelligence and mystic yogic power, but I think that even by all these qualifications one cannot satisfy the Supreme Personality of Godhead. However, one can satisfy the Lord simply by devotional service. Gajendra did this, and thus the Lord was satisfied with him.