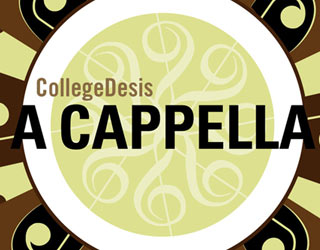 Taal Tadka, the a cappella singing group from Georgia Tech, has been featured in an album which is the first collaborative project in the desi a cappella world. The compilation album has tracks from seven of out of forty South Asian a cappella teams from all around the United States. It was released on December 2, 2012, in a unique way: the digital album was available for download at half time of an online concert at which all 40 teams were invited to play their tracks.

The organizer, CollegeDesis, has the motto “Connecting all the #brownkids in America.” Their mission is “to organize a community of South Asian students and to provide them with the resources and infrastructure they need to do amazing things.” And to help college desi organizations do their thing, they added another feature to the album project: in addition to giving a cappella teams national exposure, the album is also a fundraiser for 500+ South Asian student organizations. Everyone who purchases an album can name one of the organizations in the online directory as a beneficiary. That organization receives 30% of the sale price. For a Hindu Student Council in Iowa, or a classical dance team in Georgia, this means quick cash for very little effort. 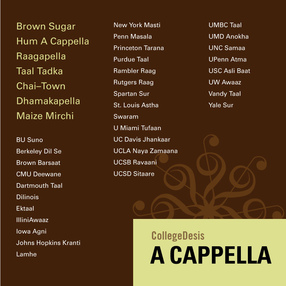 But for the college desi community, it meant that hundreds, maybe thousands were joining together all over the country for the same thing at the same time. And this Atlanta group was thrilled to be featured.

The album is still available at collegedesis.com/store (samples are freely available).