Talk at Emory on “Vishnu and His 10 Avatars” 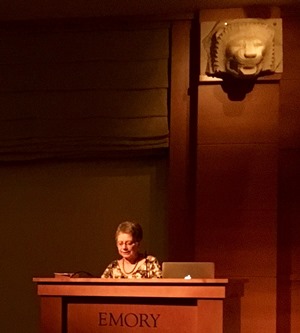 (Left and below) Dr. Joyce Flueckiger, Professor of Religion at Emory University, speaking at the Carlos Museum on "Vishnu and His 10 Avatars." (Photo: Aruna Padmanabhan)

Joyce Flueckiger, Professor of Religion at Emory University, gave a talk on “Vishnu and His 10 Avatars” on April 23, 2019 at the Carlos Museum of Emory University as part of its AntiquiTEA program. 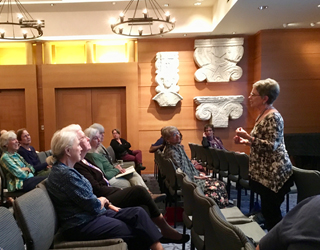 Describing her talk as a ‘garland of stories,’ she recalled the way she was introduced to the Das Avatar through oral tradition while growing up in India. She began with a glossary of terms like dharma, a-dharma, devas, and asuras, and described how boons and curses serve as a narrative motive in all the stories when “Brahma grants boons to asuras performing potentially disruptive ascetic practices (tapas).”

Indian miniature paintings on the theme of Vishnu, from the Carlos’ Asian collection, helped to illustrate various avatars as she described some of the differences between them: for instance, matsya, kurma are not worshiped, though others like Rama and Krishna are venerated all over India. She pointed out that certain representations of avatars, like that of Narasimha destroying the demon Hiranyakashipu, are not considered suitable for worship at home.


Professor Flueckiger spoke in a lively and engaging manner, bringing out story elements such as Hiranyakashipu’s cunning in asking for a boon that would make him immortal and how Vishnu found a way to circumvent the conditions of that boon. She brought out nuances, showing how rakshasas are not all bad, and in the story about Krishna and Kaliya, the central idea is not dharma restored as much as “dharma managed”: it is the nature of the serpent to be poisonous, so Krishna finds a place where Kaliya’s poison would not be harmful.

The Indian paintings add to the museum’s collection and serve as teaching objects for the Department of Religion.