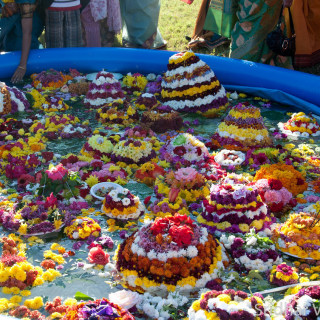 The farther you live away from your home country, the more you start loving your heritage, customs, and traditions—this truly shows up whenever the Telangana Community (TCI) organizes its public events. Every year hundreds of people attend Bathukamma, a festive occasion celebrated with a beautiful flower stack, arranged with seasonal flowers in seven concentric layers of potter’s clay like a cone. Bathuku in Telugu means live/life, and Amma means mother, hence Bathukamma is celebrated for the glory of the patron goddess of womanhood, later denoted as Goddess Gauri. The celebration usually highlights folk songs/dances followed by the actual ritual. Women sing songs and prayers by moving in circles around hundreds of bathukammas that they bring.

This year's festival was held at South Forsyth Middle School on October 20 and was attended by a few hundred people. The cultural program attracted several amateur folk singers and dancers. Artists sang several songs written in praise of village life. Dances by several of groups of kids attracted the audience. 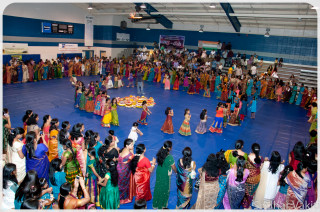 After a two-hour cultural program, bathukamma was played by more than 300 women with jubilation. Several bathukamma songs were rendered by visiting moms. New singers did an excellent job, with passion. Several little girls came in true traditional dress, langa and voni, and looked so cute.

Begun in 2006 with ten families under the leadership of Late Sri Satyanarayana Reddy Gavva, the festival has grown into a much-awaited event. Initiated and organized by half a dozen people with dedication, this event attracts people living in Metro Atlanta—originally hailing not only from Telangana area but from all places of Andhra Pradesh. In fact, those who were unfamiliar with it are now equally excited to watch this festive moment.

Since 2010, the Telangana Community has annually honored someone who contributes the most to the community. This year, Chandramohan Nellutla was recognized and honored for his services. He taught 'Special Math' for kids of all ages. According to his students and their parents, these sessions helped them immensely in improving their math skills. Narender Reddy presented a plaque to Chandramohan and said, "People like Chandramohan always demonstrate their selfless services. Our kids do appreciate this gesture deeply and develop a habit of serving community when they grow up."

This year's Bathukamma was co-hosted by Greater Atlanta Telugu Association (GATA) and Telugu Association of Metro Atlanta (TAMA). Both Telugu organizations extended financial support, and their officers attended the program. Satyanarayana Reddy Tangirala said, “GATA, since inception, has been supportive of all TCI activities. … [T]he goal is the same—serving community. GATA’s objectives and goals are mostly geared towards helping families and children.” TAMA President, Suresh Peddi said, "I am very delighted to be here this afternoon and take part in such a colorful celebration. I am here to learn and witness this wonderful festival. TAMA has always supported TCI during Bathukamma and will in coming years. Such events promote and help us respect our traditions.” North American Telugu Society (NATS) also extended financial support for this year’s Bathukamma.

Rathnaker Elugunti, President of TCI, after lighting of the lamp, gave a quick account of how the organization helps our people back home. Ravi Chander, a champion of Water Projects mission in Telangana Districts, could not be present but sent a message that emphasizes the need for purifying water in backward areas of Telangana because of several water-borne diseases.

The cultural program, designed and coordinated by Viju Chiluveru and Madhavi Gangasani every year, was ably supported by Ram Durvasula of RamDJ.com. Anitha Vanagala and Swapna Katta did an excellent job as emcees of the afternoon. They also gave a brief overview of how and why bathukamma is made. Srinivas Durgam, Srivalli Kondur, Nanda Chatla and others sang beautiful songs. A dance item by students of Shiva Institute of Dance was one of the highlights. A few other dances choreographed by Radhika Vangapally, Anitha Vangala, and Sujatha Nelluttla captured the audience hearts. Last-minute dances were also enjoyed by everyone.

Every year TCI holds a contest to encourage women to arrange beautiful bathukammas. Led by Ramadevi Reddy Boyapally, this contest was judged by several other women. First prize was shared by Anitha Vangala and Kakatiya Queens. Second Prize went to Busa Laxmi, Srujana Gandra, and Madhavi Ganagasani, and Third Prize was shared by Sandhya Chiluveru, Laxmi Enuganti, and Shylaja Vadire.

Food was coordinated by Prashanti Asireddy with the help of several volunteers: Sudhira Elugunti, Neeraja Boyapally, Lavanya Joginapally, Mahesh Nilagiri, and others. Venue coordination was handled by Venkat Veeraneni. Sridhar Vakiti, who volunteers to take photographs every year, did a wonderful job of capturing every moment of the event and broadcasting the show live on behalf of YuppTV.

In his vote of thanks Venkat Veeraneni praised the efforts of everyone involved, contributors, volunteers, and participants, and appreciated their support.