Home > Magazine > Around Town > Telugu heritage shines for audience of 10,000 at NATA Convention in Atlanta

Telugu heritage shines for audience of 10,000 at NATA Convention in Atlanta 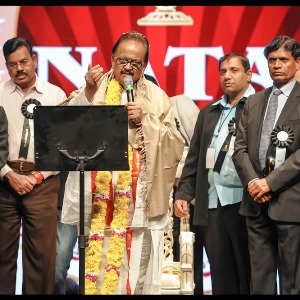 A Lifetime Achievement Award is presented to singer Padmabhushan Sripati Panditharadyula Bala Subrahmanyam garu or SPB as he is affectionately known.
(All Photos: Vakiti Creations)

Tollywood sensations Tamanna, Praneetha, Vimala Raman, Laya, Madhavi Latha, and others added to the glamour and beauty quotient in the cordial environment. The cream of Tollywood entertainers Siva Reddy, Hema, Jabardasth team, Madhavapeddi Suresh, and Ghantasala Ratnakumar added to the excitement with their fantastic humor and spontaneous exchanges. Melody was in the air as singers Sunitha, Gopika Poornima, Mallikarjun, and other stalwarts gave commanding performances.

Day 1. It is a herculean task in itself figuring out what to mention for an event of such epic proportions as this convention. People of Telugu origin from all over the world met and celebrated the Telugu culture and heritage. The banquet on July 4th was a formal evening for sponsor and donor recognition, attended also by glitterati and Who’s Who of the Telugu diaspora.

The stage backdrop of colored panels was by Bytegraph Creations. The table and chair linen, ice sculptures, fruit art, and food canopies around the hall were a visual feast. Table centerpieces had fresh orchids on top of gold mesh, and bottles of premium wine were provided by corporate grand sponsor, Paramount Software Solutions.

Several audiovisual screens enhanced viewing of the main stage and showed video displays of sponsors along with teasers for next two days. American Idol semifinalist Shubha Vedula gave the American and Indian national anthems with a group of teenagers. A group dance to lord Ganesha was the first dance of the convention: Mahaganapathim, a fusion dance.

NATA Excellency awards were presented to outstanding individuals from various fields such as medical, community service, media, research, entrepreneurship, and other areas. Service awards were conferred upon individuals for their support of NATA Seva Days in India and elsewhere. Benefactor awards were given to 10k donors.

Sunitha Upadrashta entertained the audience with her emceeing as well as melodies from her hit movies. Mallikarjun and Gopika Poornima also sang. A fusion dance "Talking Drums" choreographed by Smt. Padmaja Kelam and Siddarth Kelam showcased grace while fast footwork kept an energetic rhythm. A group from Shiv's Institute of Dance performed to a Telugu film song medley which was enjoyed by everyone.

Day 2 kicked off with a flash mob witnessed by a huge gathering, followed by the Swagatham (welcome) song and inaugural dance for the song, written by NATA Brand Ambassador Shri Chandrabose, music composed by Shri Ramachari Komanduri, and choreographed by Smt. Neelima Gaddamanugu. [This item was received with much enthusiasm, has been requested for playing on the radio in India, and for an award in India--see video at end of report.]  Chief Guest Governor Nathan Deal addressed the gathering after an inaugural theme dance extolling the Telugu heritage and release of the Inaugural CD. Governor Deal highlighted the achievements of Indians in various fields and the partnership between the U.S. and India. He recognized contributions of people of Telugu origin around the world and lauded efforts by the Telugu community in community services and charitable work. 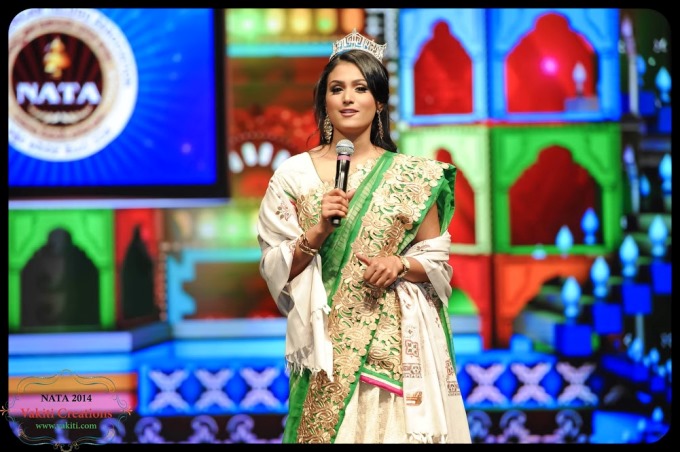 The proud moment of the evening came with the conferring of a Lifetime Achievement Award to Padmabhushan Sripati Panditharadyula Bala Subrahmanyam garu or SPB as he is affectionately known. The spirit and talent of SPB, the “Gana Gandharva,” one of the best singers in the world, is well known. President Dr. Sanjeeva Reddy, Convener Bala Reddy Indurti, Coordinator Srini Reddy Vangimalla, Co-Convener Dr. T. Satyanarayana Reddy, Advisory Council, Executive Committee, Honorary EC were part of the felicitation and awarding a swarnakankanam, memento, bouquet, and shawl to this singer of the millennium. The capacity crowd of 10,000 gave a standing ovation to SPB, and his song “Punya Bhoomi Naa Desam Namo Namami” was the highlight of the convention. [See this video also at end of report.] 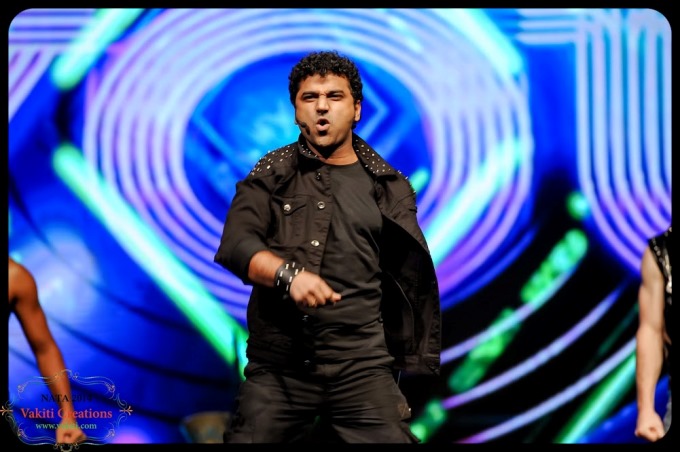 Composer and singer Devi Sri Prasad or DSP brings the audience to its feet.

The DSP musical show brought the entire auditorium to its feet as pulsating beats rang one after the other to the top hit melodies of current Telugu films. As the sizzling numbers were belted out in glorious style, the audience was on its feet, clapping and swaying, or dancing to the superb melodies.

Videos:
1) Opening ceremony song of the 2014 NATA Convention in Atlanta:
a) Raaga.com, a major online radio station that plays Telugu songs across AP - India and in this country, wants to play the NATA Inaugural song on their radio because of its uniqueness, modernity, and melody.
b) Radio Mirchi, a major radio station in AP - India wants to give an Award for the NATA inaugural song because of its uniqueness among Telugu songs in describing the history and culture of the Telugu Heritage.
Credits: Mr. Chandrabose garu for writing, Mr. Ramachari Komanduri garu and his troupe for music composition/recording, Neelima Gaddamanugu for choreographing, 100 participants for dancing.