COVID-19  In-depth info for Indians in Atlanta/Georgia. Click here
Home > Magazine > Around Town > The Ahmadiyya Muslim Community and the concept of the Messiah

The Ahmadiyya Muslim Community and the concept of the Messiah 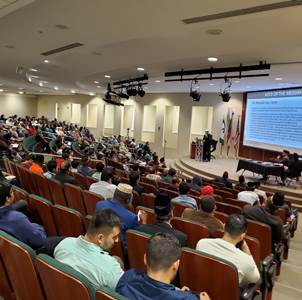 For the 130th anniversary of the worldwide Ahmadiyya Muslim Community (AMC), the community’s GA chapter held a free public symposium on Saturday, March 23, 2019 at Georgia Gwinnett College. The purpose of the event was
to interact with local residents to raise awareness,
erase misconceptions,
identify commonalities among Abrahamic faiths (Christianity, Judaism, and Islam), and
tell about the arrival of the Messiah, Mirza Ghulam Ahmad (1835-1908) almost one and a half centuries ago in the small town of Qadian, Punjab, India.


The program began with recitation from the Holy Qur’an, followed by a speech about “Needing a Messiah” by Mr. Najeem Dayisi in which he explained that the present age (the ‘Latter Days’) is the age about which all Abrahamic faiths contain the prophecy that a world Reformer would appear for the ultimate unification of mankind. Christians refer to him as the reappearance of Jesus, and the Jews are expecting a Messiah who is yet to come. This does not mean that all the prophesied Reformers would come simultaneously or only one prophecy would be fulfilled and the rest false. This cannot be so because if it happens and every Reformer appears for different religions and with a different name then it would certainly cause religious conflict in the name of God.

Ahmadi Muslims follow the same Holy Scriptures and teachings as other Muslims. The key difference is that Ahmadi Muslims believe that the Promised Messiah (the Mahdi or Reformer in some texts) of the Latter Days has arrived and that he established the Ahmadiyya Muslim Community on March 23, 1889 with the initiation of forty dedicated members—while other people are still waiting for a reformer to come. Mirza Ghulam Ahmad, founder of the AMC, declared in 1891 that he is the Messiah awaited by all religions.


After Mr. Dayisi, Mr. Hazeem Pudhiapura spoke about the life of Mirza Ghulam Ahmad. He said that whenever a person claims prophethood, he is ridiculed. Jews believed that a previous Israelite prophet Elijah (Ilyas) had ascended to heaven in his chariot of fire and that before the advent of the Messiah, he will descend in his chariot and prepare for the advent of the Messiah. So, when Jesus made a claim to Messiahship, they rejected him saying they did not see Elijah descending from the heavens. When Jesus claimed that John the Baptist was the promised Elijah, Jews insisted that he should have descended from the heavens if he was Elijah and so they rejected both Jesus and John. Like other Muslims, the AMC believes that Jesus was a righteous prophet raised by God among the Israelites and his Second Advent is not his return in his physical body but is the advent of one who would come in his power and spirit, with many similarities, to revive the beliefs of Muslims and others in the true teachings.

Imam Yahya Luqman delivered a speech about “130 Years: Progress and Achievements.” He spoke about the astonishing event of Mirza Ghulam Ahmad claiming to be the global Reformer. It was even more surprising that this voice, raised from an unknown village, was heeded at all. Some people responded to his call while others raised a storm of hostility—but the Ahmadiyya have not been exterminated.

One of the guests, Dr. Nazeerah Dawood, shared her comments: “How can one become a scholar when they have their own limitations, boundaries in gaining knowledge or experience? Yesterday afternoon, I was fortunate to be at the right place at the right time: Public Symposium—130 Years of Ahmadiyya Muslim Community. It was such a learning experience, and I realized there is so much more to learn of the world, people, beliefs, faith, and the reason for our living. I had no knowledge about this community. Ahmadiyya Muslim Community, thank you for sharing the knowledge and increasing awareness on ‘Love for All, Hatred for None.’ I was reminded yesterday of the interfaith work that I had the pleasure of moderating in the county government and all the positive energies that came together to increase awareness on the strength of togetherness. Beyond faith and belief, acceptance and respect for oneself and others (culture, belief, and faith) brings peace and harmony.”

Tamil Olsen, Public Affairs Director for the Church of Jesus Christ of Latter-Day Saints in Suwanee, said, “It was my pleasure to be there! I learned so many things about Islam and have great respect for it and the example that each of you set as followers.”