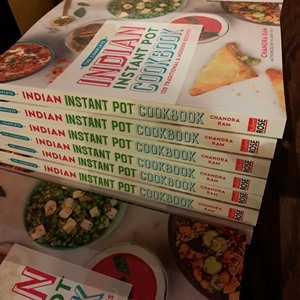 Until recently, cookbook authors had few choices when it came to promoting their work. Typically, it was through a talk or lecture at a library for no compensation, or if they were lucky, a bookstore offering them a table for a short time, where eager readers were ushered through a serpentine line to have their books signed, and if they were lucky, to get a photograph with the author. Some book festivals, like the Decatur Book Festival offer a ‘show-and-tell’ model, which is like attending a live demonstration, and where books are available for purchase later. However, a prix-fixe dinner for a newly released cookbook, hosted at the author’s home or a local restaurant, has been a growing trend among cookbook authors. At such events, the ticket price covers both a predetermined meal and a signed cookbook by the author. On November 11, 2019, Chai Pani of Decatur hosted author Chandra Ram as she introduced her latest cookbook, The Complete Indian Instant Pot® Cookbook.

There are many books about cooking Indian food in an Instant Pot®, and this is a familiar concept for those who cook Indian food on a regular basis. The popularity of this style of cooking comes from its convenience factor—it eliminates much of the guesswork or andaz factor, a hallmark of old-fashioned cooking techniques of mothers and grandmothers. The success of any cookbook finally lies in the hands of the reader and their confidence in the recipes they use.

Chai Pani was transformed into a community space for the evening. Long community tables encouraged people to choose where they sat. Unlike when one normally goes to dinner and talks only with friends and family, these larger tables are specifically intended for guests to socialize with others, converse, get to know fellow attendees, and build community. There were at least seven such tables seating 10 guests each, and the hostess noted that the event was sold out. As per the theme of the event, each table had a large Instant Pot®.

Guests were welcomed with a Curry Leaf Mojito, using a blend of Amrut Two Indies Rum, curry leaf, lime, and Demerara sugar; it had a pronounced flavor of green curry leaves. Shortly after 7 pm, the executive chef of Chai Pani, Meherwan Irani, introduced himself, welcomed guests to the dinner, and talked about how the whistles of a pressure cooker shaped his childhood memories of growing up around food. He introduced author Chandra Ram, who shared stories of her mixed Indian and Irish heritage, and of being fearful of a pressure cooker because it seemed intimidating. She shared her apprehension about writing a cookbook surrounding the Instant Pot because the prospect was daunting—and then credited a ‘Brown in the South’ dinner that Meherwan Irani and other chefs of Indian origin had hosted at Chai Pani in 2018, that reassured her that her interpretations of Indian flavors were shaped by her own life experiences, and therefore she felt validated. She assured the guests that this meal would convince them to use the Instant Pot® more frequently.

The dinner was served on eco-friendly plates made from palm fibers. Appetizers included an uttappam blini, small portions of uttappams cooked with shredded beet roots, carrots, and jalapenos, served with a coconut cilantro chutney. A large platter of lamb meatballs followed. To make the dinner exciting and interactive, after the appetizer course, the hosts brought out a platter of mise en place that included partially prepared spices, sautéed onions, marinated chicken, washed rice, and water, and then walked the guests through preparing their own chicken biryani in the Instant Pot® that was on their table. The Instant Pots® were taken to the kitchen and plugged in, so the biryani could cook while the dinner course arrived; this included an Aloo-Tikki Pav, a Punjabi styled Pumpkin Curry, poriyal-styled Coconut Green Beans, and Pomegranate Raita. Chandra Ram brought out the Instant Pots® as they finished cooking to their respective tables, and guests waited for the final pressure release that signaled that the biryani was ready; guests then helped themselves to servings of the biryani and finished their meal. Dessert was Rasmalai Cake. Recipes for all these dishes were in Chandra Ram’s cookbook. There was an opportunity to have the books personalized, speak to the author, and take pictures. Meherwan Irani graciously included a sample of Chai Pani’s in-house brand of garam masala, Spicewalla, for guests; it has most recently found a mention on Oprah’s “Favorite Things” list for 2019. 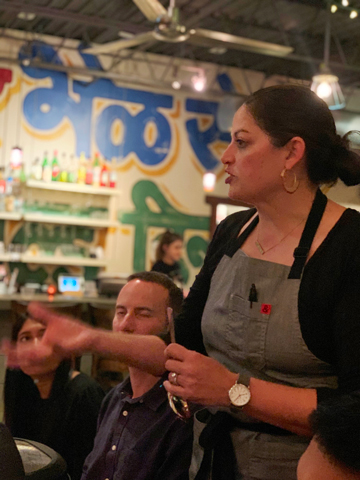 Chandra Ram (left) is a Kentucky native who lives in Chicago. She has a background in journalism, a degree from the Culinary Institute of America, and a certificate from the Court of Master Sommeliers. She is the editor of Plate magazine, a publication for chefs, and has won several awards and nominations for her food writing and journalism.