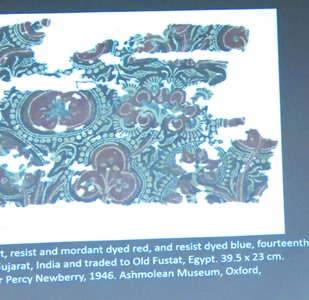 For those interested in fashion, saris, and Indian cloth, or business, global commodities, and textiles, April 7, 2016 was a fascinating day. Giorgio Riello, Professor of History, University of Warwick, UK, was at Georgia State University’s Asian Studies Center presenting a talk on why Indian cottons were such a popular commodity first in India and later across most parts of the world. Dr. Riello is an expert on textiles, shoes, fashion, and more, having authored or edited such books as Luxury; The Global Lives of Things; Cotton; The Fashion History Reader; The Spinning World; How India Clothed the World; A Foot in the Past; and more. 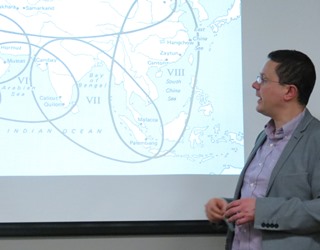 Indian cotton textiles were already popular from Egypt to Japan by around the year 1,000 CE as a result of their superior colors and patterns—a specialisation of producers in India—and thanks also to very dynamic merchant communities based on the coasts of India, especially in the region of Gujarat in the northwest. Textiles were traded for spices from Southeast Asia, porcelain and silks from China, gold and ivory from Africa.

When European traders arrived on the coasts of India at the end of the 15th century, the trade was already large and established. They joined existing Gujarati, Armenian, Jewish, and Muslim trading communities and started trading Indian textiles not just in Asia but also back to Europe and into the Americas where Indian cotton became very popular, especially in the 17th and 18th centuries.

Indian cotton textiles travelled long distances over land and water. In the north-west, Indian cottons reached the markets of China, West Asia, and the Mediterranean regions through overland caravans which followed the Silk Road. There was also the maritime route, which connected Gujarat and western India with West Asia and the Mediterranean through the Persian Gulf and the Red Sea ports. Indian textiles were the most prominent merchandise leaving the Indian subcontinent for these markets during the early modern period. There was a strong maritime tradition in the Bay of Bengal and many ports on the Indian coast were connected with the ports in Southeast and East Asia.

Cotton textiles were the main commodities exchanged between the two regions since the late Middle Ages and more so in the early modern period. Indian merchants were the prime carriers of this trade in the Indian Ocean world. The Portuguese in the sixteenth century and the Dutch and the English East India Companies in the seventeenth and eighteenth centuries played an important role, and large groups of merchants, brokers, agents, and bankers/financiers were involved.

Pieces of cotton textiles from Gujarat from the 14th century have been found in far-flung regions—much before the so-called ‘calico craze’ or ‘fashion revolution’ in Europe in the 17th century, which generated a large demand for good-quality cotton textiles manufactured in Bengal, Gujarat, and southeastern India. 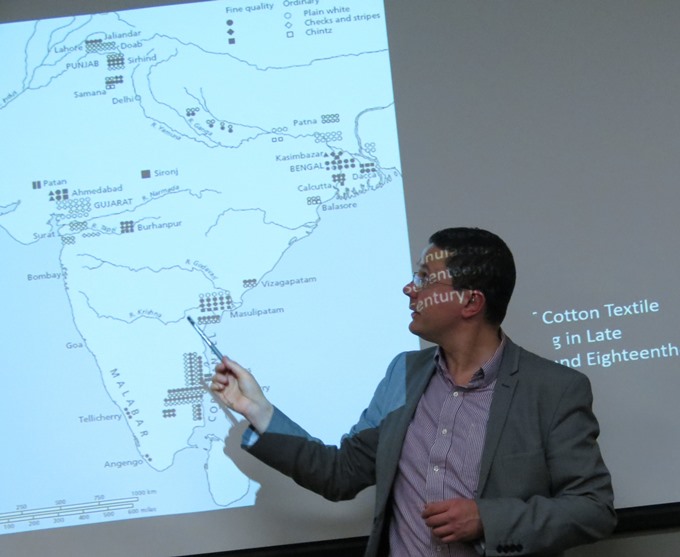 The industrialisation of cotton textile production in Europe, and especially in England, starting at the end of the 18th century challenged the dominance of Indian textiles in global markets. Machine-made products from Lancashire cost only a fraction of the fine muslins that were the specialty of Dacca. The industry in India entered a crisis that lasted for the best part of the 19th century, at least until the sector re-emerged as an industrial one. Cotton cultivation continued. From the 1870s onwards, India became a major supplier of raw cotton for the English and American industries.

Today the cotton industry in India is not large, though important. Niche production is carried out in places like Kutch (Gujarat) where artisans produce traditional textiles and patterns. They rely on global networks of distribution and, as for other industries in India, they are in need of support in terms of infrastructure.

Cotton textile production still accounts for more than 50% of all textiles produced in the world, being larger than synthetic fibres. The sector is very complex and includes large raw cotton producing firms, large-scale industrial textile manufacturers, and small niche artisans. Today a great deal of textile and garment production is carried out in China. So perhaps India’s road to economic success in this sector might be to invest more in quality and premium products. 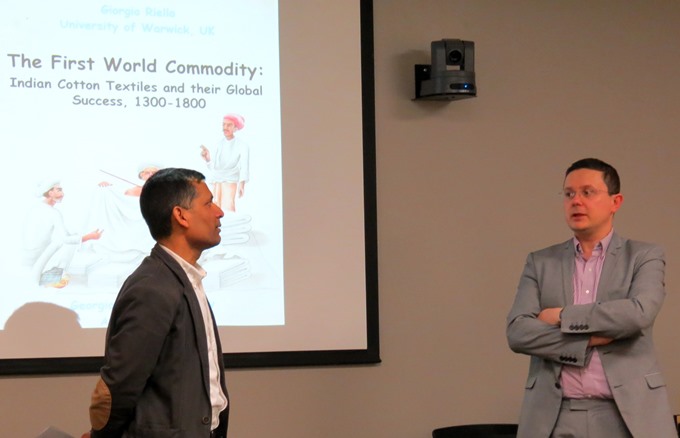