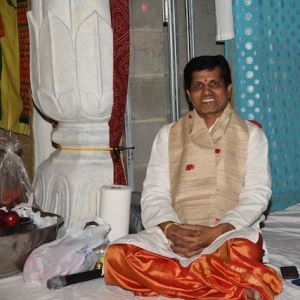 Sanatan Mandir Atlanta, in Smyrna, Georgia, organized a joyous, spiritually suffused Mandal Puja at the almost-ready new Sanatan Mandir on auspicious Vaishakh Shukla-Dwitiya and Tritiya, May 7 and 8, 2016. Sunday being Mother’s Day, it, too, was part of the festivities. The construction of the new Sanatan Mandir is progressing, and the Mandir will be inaugurated soon.

After Bhoomi Puja and Shilanyas, Mandal Puja is the third phase of the ceremonies. The final phase will be the pranpratishta ceremony. All who attended Mandal Puja were full of admiration for the ten attractive marble murtis (deities) from Jaipur, India. The marble was from Makrana mines and of Chausariya grade, ideal for lasting long and retaining its lustre. During the pranpratishta ceremony each deity, Lakshminarayan, Shri Ram, Laxman, Sita, Hanuman, Ganesh, (Das Swaroop) Shrinath, and Shri Venkateshvar Swami, will be imparted pran (life force). The Mandal Puja initiates this process by placing the murtis in grains. Shivalinga and beautifully decorated navgrahas were also on display.

Upon entering the new mandir, artistic, lavishly colored mandals representing each set of deities, with their kalash and decorated with garlands, colorful vegetables, flowers, grain, and fruits were displayed. Rich adornments on the deities enhanced the festive atmosphere.

Praful Desai informed the audience about the program, and Mandal Puja Coordinator Prakash Desai noted progress on the Mandir’s construction. The shikhar along with the kalash will arrive soon. A model of the columns for the outside of the Mandir (a replica of columns in Jaipur) was displayed. Fifteen sponsors have agreed to pay $5,000 each for the columns; 15 more columns are available for sponsoring. Full and partial sponsorships are available for murtis; each murti sponsor is eligible to become a trustee and participate in the pranpratishtha. Surinder & Kusum Bahl; Vir & Lucy Nanda, and Dr.Kirit & Rashmi Shah are new trustees; Bhaskar & Purvi Bhavsar have sponsored Shiv Parivar murtis.

Dr. Prakash Desai thanked Dr. Ashok Desai for going the extra mile in cleaning trash from the parking lot, and also Praful Desai for making two trips to India to select sculptors for the new murtis.

Gunvantbhai Naik, Praful Desai, Priya Bagdi, SreeVidhya, and Lata sang uplifting Lord Ganesh and Lord Krishna bhajans and also Hanuman Chalisa, while Bhavesh Patel accompanied on tabla. Not only were a lot of children there absorbing the culture, but also three of the four vishesh yajmaans are from the younger generation.

Sunday was Akshaya Tritiya, an auspicious day when Brihaspati (guru), Sun, and Moon come together. It was also Mother’s Day: mothers as epitome of compassion and knowledge should be loved and respected by all. On Sunday, the Mandal Puja was graced by Consul D.V. Singh. The vishesha yajmaans and other devotees were led by Acharya Padhiji in archana. There was Sarva Devata Mandir Puja, Goddess Laxmi archana, Chatur Veda Seva, and Gayatri mantras for each deity. Hetal Gordon and Suja Katarya representing the younger generation gave inspiring speeches emphasizing the need for new temple and the importance of giving back to the community.

After mantrapushpanjali and aarti came a delicious mahaprasad with some items donated by Haldiram and RajBhog and other items (sabjis, daals, rice, and puris) prepared by volunteers led by Kartik Patel in the current Temple’s kitchen.