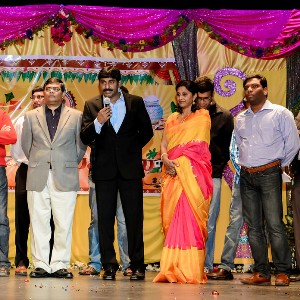 New Year 2014 started on a very good note for TAMA, with a ‘never-been-seen scene’ buzzing with crowds, high-voltage programs, and busy stalls at the Sankranthi Sambaraalu celebrations on January 18, 2014 at Berkmar High School, Lilburn, Georgia.

The welcome by Cultural Secretary Anil Boddireddy was followed by a Ganapati song while the team lit the lamp. Emcees Suresh Korothu, Sravani Rachakulla, and Janardhan Pannela got the ball rolling in a unique way as Revati Mettukuru, President of Tennessee Andhara Samiti, joined them. An eclectic mix of dances, songs, and instrumentals featuring classical, folk, and film songs were lined up by the TAMA team for the audiences. A special attraction was mimicry by Mr Ravi Bhaviri of the famous Evadigola Vadide program on TV9.

President Sandhya Yellapragada introduced the 2014 Executive Committee Team. Sunil Savili, newly elected Chairman of the Board, explained the board's projects including the need for office space and efforts in owning a new building of its own. Chief Guest of the night Rajinder Singh, Consul Head of Chancery from Consulate General of India in Atlanta, brought good wishes for the Telugu people for Sankranti.

The event was sponsored by Paramount Software solutions. A delicious festival dinner was provided by Srikrishna Vilas. Photography services were offered by Sridhar Vakiti and Praveen Boppana of Vakiti Creations, and the DJ was provided by Don DJ with support of Srinivas Durgam. The show was gracefully wound up with thank yous by Vice President Vinay Maddineni.

An explanation of muggula poti:
Rangavalli Muggu in Telugu, Rangoli in Kannada and Kolam in Tamil is an Indian pattern based on mathematical grid structures, used to make a form of sandpainting for religious festivals. There is a symmetry to the designs and they are used in handicraft and stitching as well as in gardens and on ground using flour or powder.

These patterns or designs were once created using rice flour. Holding a handful of flour in their right hand, the woman will uniformly drop the flour to make a line through her thumb and pointer and keep on moving her hands to make the curve or the dots. Nowadays, women use powdered stones. (Stone is crushed and sold commercially).

The patterns are very complicated and huge during festival months. The temples will have complex patterns that will cover thousands of square feet. Sometimes, several women together will create one large design. The patterns are also called 'Muggulu' in telugu and 'Kolam' in Tamil'.

When the symmetrical pattern is decorated in colors using colored sand or flowers, then it is called rangoli.

The design or pattern is not always symmetrical. It could just be a continuous line that curves around to make a border or continuous line design. The "threshold" design, as it also referred to, is compared to African sand drawings. http://www.bangalorewishesh.com/component/eventlist/details/1-muggula-poti-2011.html?pop=1&tmpl=component