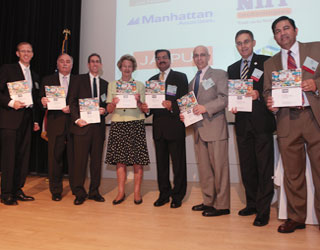 One of the top U.S.-India business conferences in the nation concluded successfully on June 22, at the Georgia Tech Research Institute (GTRI) in Atlanta. The USA-India Business Summit (UIBS) and the 18th annual Georgia Tech Global Business Forum featured numerous dignitaries who addressed the future of the Indian economy and the trade and investment relationships between the United States and India. The summit had more than 40 speakers and was attended by a host of dignitaries including Dr. P.M. Murali, President of the Association of Biotech Led Enterprises (ABLE), India and Managing Director, Evolva Biotech; and David A. Dodd, CEO, VaxyGen.

Mr. Ani Agnihotri, program chair of UIBS, introduced speakers on the future of the Indian economy and opportunities for trade and investment between the U.S. and India, including Dr. John McIntyre and Dr. Steven McLaughlin – GA Tech CIBER (Center for International Business Education and Research) and Mark Lytle, GSU CIBER and Georgia Department of Economic Development.

Hon. Ajit Kumar, Consul General of India, Atlanta, delivered the keynote address, declaring the Indian economy a continuing destination for U.S. investment. Indian companies are also investing in the United States to the tune of $25 billion in various areas including manufacturing. India is committed to buying defense equipment worth $9 billion dollars, and Georgia, home of Lockheed Martin, is getting a share. Other areas of cooperation include the health care industry: a global center for disease protection is to be established in New Delhi with the help of the CDC, Atlanta. Kumar also announced that the new consulate will be established in Sandy Springs. 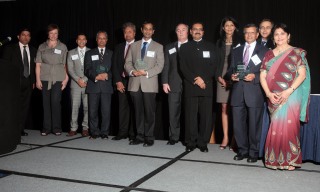 The main speaker at the evening banquet, Ms. Duriya Farooqui, Chief Operations Officer for the city of Atlanta, spoke about the new international terminal at the airport and about collaborations with France, Saudi Arabia, Great Britain, Qatar, and India.

Designers and models presented the UIBS Indian Fashion Show "Through the Ages."

A show on “Indian Fashion through the Ages” featured Indian attire designed and made in India with the support of Apeejay Stya University. Costumes of ancient, medieval, and modern times were modeled by students of Georgia College with appropriately selected period music.

The major focus of the second day was on healthcare, medicine and science, including the biotech industry, biopharma, vaccines, education, and more.

The Indian healthcare industry is valued at $75 billion and estimated to grow at about 12% per annum. Despite these staggering numbers, healthcare accessibility is still a roadblock for rural India, which explains its prominence as a topic of discussion.

Healthcare insurance in India is of three kinds: central, state, and private contribution. A quarter of India’s population is covered by public healthcare. Suryanarayan said that “the major metros offer world class medical facilities but they don’t have enough capacity, neither are they affordable for everyone.”

He said there were immense opportunities to create a network of healthcare facilities in newly urbanized areas, beyond the metros, for dialysis, dental care, eye care, orthopedics, physiotherapy, ENT specialists, women’s health, diagnostics, diabetes, well baby clinics, etc. He also urged healthcare companies to create facilities in rural India. Trained nurses or medical practitioners can travel to the far flung areas, perform basic tests, and send the results to a doctor to read the tests, diagnose the problem, and prescribe the required medication or even refer to a secondary or a tertiary doctor depending on the need.

Allen described BIO Florida, a statewide trade association for the bioscience industry. Russell of Revenue Med spoke of his association with India, as 90% of the company’s staff is in India. Both spoke highly of Indian companies’ ability to partner and deliver.

Finally, Stern asked if there were existing models that could be replicated to improve healthcare delivery in India. Allen pointed out that although the United States is not a perfect model itself, we definitely have a larger population with access to healthcare. Suryanarayanan suggested mobile rooms to increase healthcare accessibility in rural areas. He applauded Apollo Hospitals, Narayana Hridayalaya, and ISRO’s telemedicine program, concluding that although there were no perfect models to replicate, many ideas could be implemented to improve healthcare delivery in India.