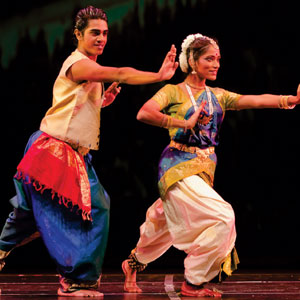 Third Eye Dancers and Bharathakala Natya Academy in partnership with Sewa International and The Art of Living Foundation presented an enthralling dance drama, Enchanted Snow White, based on the beloved fairy tale, at the Gwinnett Performing Arts Center, on Saturday, October 29, 2011. The program was a fundraiser for Bhutanese refugee children’s education.

The show, which attracted over 650 patrons, was a magical spectacle, a synthesis of colorful costumes, pulsating music, and over thirteen captivating dance pieces by the Bharathakala Natya Academy’s talented and well-trained students (over 60 students), which transported the audience to the magical kingdom of Snow White and the fairies. The innovative concept, story and choreography were by Bharathakala Natya Academy’s founder and artistic director, Subathra Sudarshan.

Sudarshan explained the mission of Third Eye Dancers: to increase awareness about social issues affecting children, through dance so that they with their parents can get involved in the remediation of such issues. “Having lived in a camp for close to 18 years, the Bhutanese refugees have been offered legal resettlement by the U.S. These children need guidance, support, and help to develop into responsible citizens of tomorrow. SEWA and Art of Living Foundation have helped them transition to American culture and to new life style. Since past eighteen months, some Johns Creek 11th and 12th Graders have been helping Bhutanese students over weekends with English, maths, and SAT test preparation. Enchanted Snow White’s underlying moral is ‘No matter what your race (or color) is or how you look physically, to be truly beautiful you need to have noble virtues.’ Finally, some of the Bhutanese families and Ralph Parker are in the audience today, so do meet with them and offer your help.”

The dance drama begins with Fairy Godmother (Marsha Hildebrand) in crystal clear delivery narrating the fairy tale. The King (Abay Radhakrishnan) and Queen (Lakshmi Thesam) enter with the beautiful baby Snow White. The story continues as in the traditional telling. The princess loses her mother and the King remarries. Little Snow White’s (Mirra’s) stepmother (Subathra) is an evil and jealous woman. Subathra’s skill for abhinaya was evident in the expressions of the swiftly changing moods of the evil queen from anger to cunningly plotting against Snow White.

Snow White dances with her friends to “dheem thakitha thadimi.” The evil Queen, a sorceress, creates a magic mirror, and asks, “Mirror, Mirror, on the wall, who is the most beautiful of all?” The Mirror replies, “You are beautiful of course, but there is someone who is more beautiful—Snow White, for she has noble virtues: she is generous, brave, humble, honest, nonviolent, and full of love.” Heeding the mirror’s advice (here the story takes an innovative turn), the Queen charms Snow White (Vishwa) into giving all her noble qualities. Heartbroken Snow White is advised by her fairy godmother to travel the four corners of the world, face the five elements, and regain her virtues. The Queen celebrates her departure by reclining on a seat and watching a Tillana dance. Snow White travels to the Land of Courage and faces the five elements. Snow White’s journey continues from the Land of Humility to the Land of Truth, carrying the ‘stone of tears.’ The audience is treated to two spellbinding Native and Fairy dances. The Queen orders bearded and long-haired huntsman (Nagi Natarajan) to kill Snow White. The hypnotic ‘animal dance’ and Snow White (Harini)’s exquisite Tillana commanded the audience’s rapt attention. The huntsman throws away his axe and enters into a swordfight with the valiant Prince (Nanthesan Sudarshan) and is defeated. Snow White reaches the Land of Peace. She and the fairies perform a peacock dance and the piece-de-resistance dance to the uplifting song, “Om Shanti, Shanti, Shanti.” The Queen transforms herself into an old witch (Vani Kokilakumar). The evil-looking witch (back to the traditional tale), tries to kill Snow White (Ishwarya). Snow White bites the apple, the Prince revives her, and the story has a heartwarming ending.

As the fairy godmother comments, “All of us are human, and once in a while we all lose our way. But we can regain our virtues just like Snow White.”

Marsha, who plays the fairy godmother, commented, “I was honored to be invited. I was especially drawn to the fact that they were telling a story using virtues which are the core values of Subathra's school: Charity, Education, Discipline, Respect, Responsibility, Compassion, Leadership , and Teamwork . All of these values are skills that require hard work and dedication. Teaching them to young girls makes them grow up to be strong women. It keeps them on the right path. For me, it was seeing the respect the parents and dancers had for their beloved teacher Subathra Sudarshan. The total experience from conception to performance is my take away. The wonderful thing about charity is that I always get so much more than I could ever give!”

Subathra Sudarshan as the Evil Queen, Marsha Hildebrand, Vani Kokilakumar, Nanthesan Sudarshan, and four girls Mirra Vetrivel, Vishwa Sevak, Harini Indrakrishnan, and Ishwarya Venkatachalam, who all play Snow White, excelled in their roles. All the dancers, costumes, facial adornments, use of peacock feathers, leaves and flowers in adornments were praiseworthy. The specially created imaginative scenic multimedia backdrop showed moving scenery of cascading waterfalls, thunder and lightning, castles, gardens, and even exploding fireworks, and enhanced the magical feel of the fairy tale. The brilliance and elegance of the choreography, the perfection of the technique blended with liveliness, and the variety of the dance pieces deserve accolades. An evening spent in watching this production is definitely an evening well spent.

Subathra felt that a fairy tale is a great way of conveying a story line. “This story was particularly chosen to convey a message to the youth who are always superconscious of their physical appearance. What makes one beautiful is not just the physical aspect, but the values they imbibe and portray in this drama.”