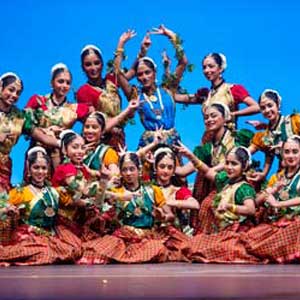 Third Eye Dancers, an Atlanta-based nonprofit organization, and Bharathakala Natya Academy, supported by Fulton County Arts and Culture, presented an enthralling dance drama at the Roswell Cultural Arts Center, on Sunday, September 30. Kalpavriksha: the Giving Tree was a fundraiser for a shelter for abandoned children in Chennai, India, run by the Mahalaksmi Foundation.

The show, a sold-out event which attracted over 600 patrons, was a breathtaking magical spectacle, a synthesis of colorful costumes, pulsating music, and captivating dance pieces by the Bharathakala Natya Academy’s over 75 students, including students from Krishna Kumar and Sivakami’s Bharata Kalarpana School of Fine Arts, South Carolina. The show was adorned by the radiant dance of Dr. Seshadri Iyengar (as Aditya, the Tree), a professional dancer from India, who captivated the audience with his brilliant footsteps and flawless expressions. Dr. Krishna Kumar (as Kaal, the Time) from South Carolina enthralled the audience with his absorbing and crystal clear narration of the enchanting story of the Giving Tree. Ishwarya Venkatachalam (as Ganga), a senior student of Subathra Sudarshan, played her part to perfection. Mr. Nagi Natarajan added humor to the show with his exceptional acting abilities playing the part of the evil village chieftain, Vikarna. 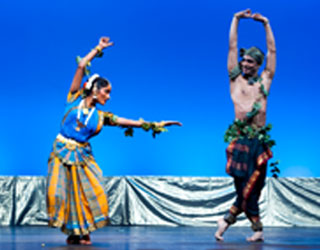 The tree Aditya in the story gives care and affection to the orphan girl Ganga in a small village, who is shunned by the villagers. The tree takes care of Ganga when her father dies. Aditya describes the beauty of nature. It was a visual treat to watch Harini Indrakrishnan nimbly perform a solo as Mother Earth, dancing with grace, confidence, precise coordination, and subtle nuances, which was greeted with audience’s wide applause. Ganga interacts with village children and wins their love and affection. The dance to the soothing and elevating song, bhajan “Manasa Bhajave Guru Charnam” was also spellbinding. The adults, however, are selfish and greedy and exploit the natural resources. There is a drought. Aditya responds to Ganga’s plea and ends the draught. The good harvest is celebrated by the villagers. Aditya tells Ganga not to forget the role of Sun in a good harvest. The dance with the radiant sun as a backdrop was also a delight to watch. Ganga is not invited to the Ganesha Chaturthi festival, so Aditya comforts her with the Shree Ganesha song. Ganga grows up into a beautiful young lady. Vikarna wants to make her his third wife, but Ganga refuses. Village children fall sick as the air is polluted. Again Aditya rescues them by purifying the air. Rakshni Kokilakumar (as Air) performs a solo Bharatnatyam-Kathak fusion dance, a joy to behold. Vikarna punishes Ganga by banishing her from the village. Aditya and Ganga miss each other. Ganga returns to the village, but is grief-stricken as many children drowned due to collapse of the wooden bridge. Aditya decides to sacrifice itself so a new bridge can be built. The riveting dance to the song “Aasai Mugam,” specially recorded for this show, beautifully sung by Mrs. Meena Nandakumar and Ms. Shridha Abaya-nathan (student of Bharathakala) also elicited huge applause. Aditya is cut down. Ganga passes away. There is a happy ending as both are reunited as saplings and grow up as intertwined trees. 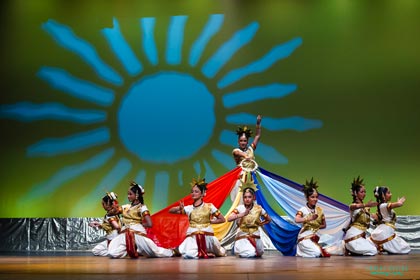 The seven colors of the radiant sun.

The innovative and imaginative concept, story, and choreography were by Bharathakala Natya Academy’s founder and artistic director, Subathra Sudarshan. She is not only a veteran dancer but is also well known for her discipline, refinement, spiritual depth, and meticulous eye for details, all of which were amply demonstrated during the show. The theme of Kalpavriksha is about living in harmony with nature by taking care of Mother Earth, fauna and flora, rivers, mountains, etc., from pollution and destruction.

Treasurer Gayathri Indrakrishnan (who also helped with attractive Souvenir preparation) explained that the mission of Third Eye Dancers was to increase awareness about social issues affecting children, through dance. “We are extremely privileged and honored to have Natyaaacharayas Shri V.P. Dhananjayan and Smt. Shanta Dhananjayan as our patrons and advisors. We are also proud to announce the formation of Third Eye Dancers Youth Council (TED-YC) this year.” Gayathri recognized three individuals for rendering services beyond just volunteering: awards were presented to Rammohan Krishnan, Abay Radhakrishnan, and Tarun Aurora, who was instrumental in forming the Third Eye Dancers Youth Council.

Through this event, Third Eye Dancers secured sponsorships for 11 children at Mahalakshmi Foundation and is expected to raise more than $7,000 for the noble cause. The main objective of the fund-raiser was to support construction of another floor to the existing building to free up space for an all-girls dormitory.

The whole cast received a thunderous ovation as it came on the stage. 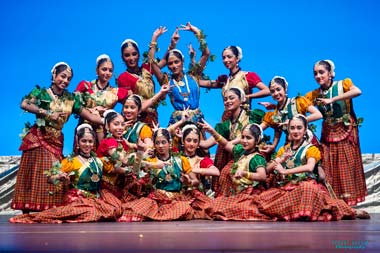