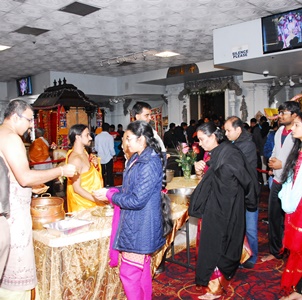 “Navodaya 2016” was celebrated at ​the Hindu Temple of Atlanta on January 1 with great enthusiasm and fanfare. The incessant rain stopped and gave way to cool but pleasant weather. Thousands of devotees thronged to both the Balaji and Shiva sanctums to receive the blessings of the divine for a prosperous and healthy 2016.

Both temples and facilities were specially prepared to accommodate thousands of devotees. The deities were adorned with special flowers and ornaments for the festive occasion. Navodaya was heralded with suprabhatam in both temples. The priests led by Sri Gopal Bhattar and Sri Srinivasa Sarma performed archanas all day long and distributed teertha prasadams to the satisfaction of all the devotees. 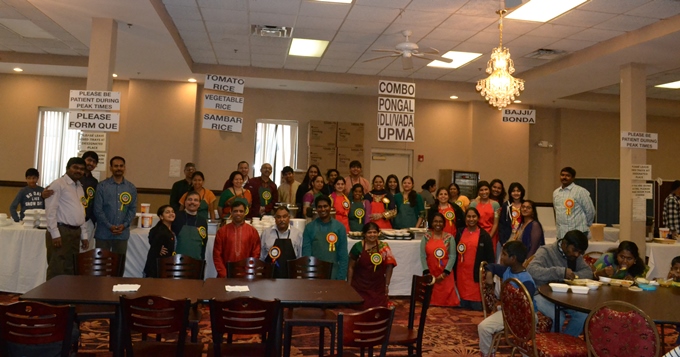 This year’s motto at the the HTA was “Service with a Smile.” With virtually no standing room in both temples, the flow of devotees was nevertheless ably managed by devoted volunteers. The overflowing vehicular traffic in the parking lots was directed to overflow lots by cheerful volunteers and shuttle operators who braved the cold weather with smiles. Hectic preparations had been under way for several days by kitchen volunteers under the leadership of P B Rao and Sairam Surapaneni. Delectable Indian food served on the day was testimony to their efforts.

The children were entertained with face painting and balloon twisting activities, their happiness and cheer adding an extra flavor to Navodaya.

Around 11am temple priest Sri Ravi Shankar performed the pooja ceremony conferring New Year blessings to the vendors in the auditorium who heralded the New Year day with brisk business. Vendors mall was colorful with display of jewelry, housewares, garments, and accessories. The nonprofit organizations spread their messages to attentive devotees.

2015 was a very eventful year for the Hindu Temple with numerous celebrations, including multicultural Ganesh Chaturdhi, eleven-day Ati Rudram, and the rajatotsavam (25th year anniversary) ushered in during December and planned to culminate in May 2016. President Pulipaka B. Rao thanked all for the above and also enumerated the flourishing of Balavihar and several language and dance institutions under the patronage of the Temple. He thanked the leadership and volunteers. The Hindu Temple, an iconic resplendent landmark in Riverdale, Georgia, is well known for its spiritual, cultural, and educational services to the Indian community. The Temple has played a sterling role in enriching the religious diversity and enhancing the multicultural image of Georgia. 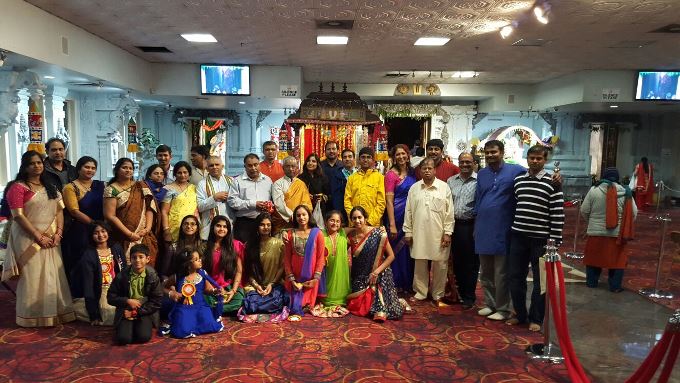 President Pulipaka B. Rao thanked
Prashanti Asireddy (Vice president), Sheela Lingam (Secretary), Ravi Kari (Joint Treasurer) and Aravind Goli (Pooja Committee Chair) for planning and executing Navodaya 2016 with great precision.
Sairam Surapaneni and his dedicated volunteer group for their selfless services in providing mouthwatering Indian cuisine.
Madhu Tata, Sunil Shavele, Srinivas Nalla, Shyam Malla Varapu, Anjiah Choudary Lavu, Venkat Meesala, Janardhan Pannela, Anil Yelamanchili, Sunil Gotoor, Nanda Chatla and all the countless volunteers and their families who cared for the devotees with smiles on their faces.
The celebration could not have been possible but for the tireless efforts of the Navaratnas (priests) and the dedicated full time and volunteer office staff.
“May Lord Venkateshwara and Lord Ramalingeshwara shower their choicest blessings on all for a happy and prosperous 2016 and with their grace enable us to write a lot of success stories in the pages of the Temple during 2016.”