Three Atlanta-based artists from India, Malika Garrett, Suhas Sengupta, and Ranjit Ahuja, recently showed their works in an exhibition called “Along the Silk Road” that filled two galleries in historic Castleberry Hill in downtown Atlanta, with the beginning point at Emerging Art Scene Gallery at 321 Nelson Street SW and including The Wiley Gallery. A closing reception with the artists was held on May 5, 2012. 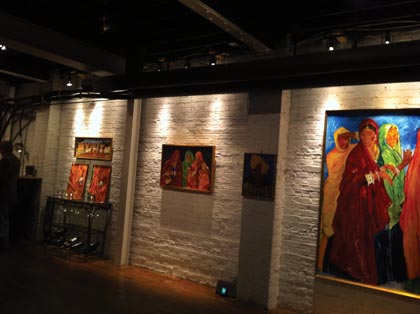 Photo: Some of Malika Garrett’s paintings in the exhibit, Along the Silk Road.

Malika Garrett was born in Calcutta, India and came to the United States to earn a BFA in Visual Arts from Wesleyan College. She paints rich, vibrant paintings with inspiration from her birthplace and its people. Malika’s work is in collections in India, Singapore, the USA, the UK and China. She was the first South Asian artist to have a solo exhibit at the Woodruff Arts Center in Atlanta. She has been featured in Southern Living magazine, among others, with appearances on several television shows.

Suhas Sengupta, an IIT graduate in Architecture and professional architect for many years, now focuses on painting and photography. His female forms are beautifully rendered and reminiscent of Modigliani’s women.
His landscapes and florals have a linear quality that shows his architectural background. The result is intensely colorful compositions of shape and textures against a unifying background with detail to line and space.

Ranjit Ahuja holds a BFA in Photography from Syracuse University. He has an extensive body of photography spanning several decades. He showed a series of black and white portraits from India circa  1976-1977. Restored from film, the work is printed as large scale digital prints. Striking portraits of camel farmers capture a people and period of time. The portraits were taken during melas (festivals) in India in the states of Rajasthan and Gujarat, an area that defines some of the Silk Route.

Denise Jackson of Emerging Art Scene curated the exhibition at both galleries.