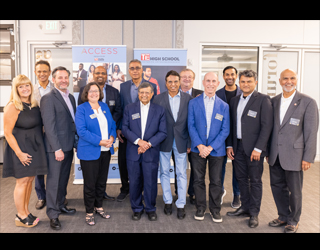 Professor Jagdish Sheth, Charles H. Kellstadt Professor of Business, Goizueta Business School, Emory University, was honored by the TiE Atlanta Foundation and the Consulate General of India on June 15, 2022 at an exclusive event to celebrate the professor and scholar who recently added Padma Bhushan, the third-highest civilian award from India, to his accolades. The honor recognizes the professor for his contributions to business and literature.

[Left] Dr. Jagdish Sheth (middle) with members of TiE Atlanta at the event hosted by them to honor him.​

Sheth is also the recipient of all four top awards given by the American Marketing Association (AMA). Additionally, he received the Global Innovation Award and Marion Creekmore Award, both from Emory University. He is globally known for his scholarly contributions in consumer behavior, relationship marketing, competitive strategy, and geopolitical analysis with over 50 years of experience in teaching and research.

The event welcomed over 75 friends, colleagues, and family. It featured a short documentary of Professor Sheth’s life and contributions to business, market, research, and philanthropy. Then, Dr. Paul Lopez, chairman of TiE Atlanta, hosted a fireside chat with Professor Sheth.

The two longtime friends kicked off their chat about Professor Sheth’s trademark Rule of Three. This rule has been shaping the markets, theory of competition, and current standing of the big conglomerates. According to the professor, all industries—as they shake out through mergers & acquisitions and other strategic movements— eventually look like a shopping mall. What this means is that there are always three anchor stores with additional specialty shops. The anchors don’t compete, they coexist. The specialty stores cater to a specific product or a lifestyle.

He provided examples of the airline industries, the dot com boom, and most recently, the cloud computing industry. But he further extended that principle to not just be applicable to the theory of competition, but in everyday life.

When asked how the Rule of Three applied to himself, Sheth humbly shared that he hoped his Rule of Three were trust, contribution to other people’s welfare, and giving back. “Giving back gives you an inner satisfaction that you don’t get when you’re receiving from someone else,” he added.

Being an educator, Sheth believes that education is a great multiplier. “When you take a grain of wheat and turn it into a loaf of bread, it has a 3X value-add. A diamond, after being cleaned and cut, has almost 15X value-add. But for a human, with education, mentorship, and nurturing, the value-add is infinite and that is something very nice to understand.”

He reflected that his roots are from the merchant community where education was not a primary focus. If things had gone according to the rules, he would have been managing a paanwala or small provisions store “with more SKUs than square feet,” joked Sheth. “But very fascinating things happened accidentally to [make a what-would-have-been paanwala] become a professor.” It was that journey that inspired his book, The Accidental Scholar. 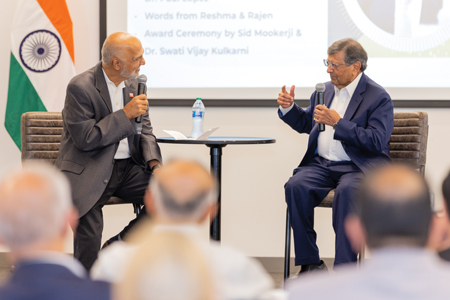 Leaning towards the power of mentorship, Sheth, who is the youngest of his siblings, credited his older brothers and sisters for mentoring him throughout his life.

Speaking to the audience of academics, investors, and entrepreneurs, he empathized that the journey of entrepreneurship is lonely and tough. “It’s 24/7, but if you think positively, the right people show up to help you out,” he added.

Reflecting back on the Padma Bhushan award, which was announced in January 2020, Sheth said it was more of a community award rather than an individual award. “I was excited, and I represent so many communities. The academic community, the Gujarati community, the South Indian community, and the TiE Atlanta community.”

He was quick to note that no award can be won without the support of a good spouse or a significant other, referencing his 60-year marriage to his wife, Madhu Sheth. “She came [from India] by herself, we had no support, and acclimated to this culture. Her journey and contributions are a bigger legacy than mine,” reflected Sheth. They have two adult children, Reshma (Sheth) Shah, professor of marketing at Emory University; and Rajen Sheth, CEO at Boardwalk Development Group.

As the event closed, Lopez asked what are the two lessons Sheth has learned from his career and what he hopes for people to take away. Not refraining from his own Rule of Three, Sheth emphasized the following:

The evening concluded with a presentation to Professor Sheth from TiE Atlanta and Consular General of India for his service. “Dr. Sheth is an outstanding scholar and thought leader in marketing, geopolitics, consumer behavior and more. The Government of India is proud to confer the Padma Bhushan in literature and education to Dr. Sheth,” said Madan Kumar Ghildiyal, Consul, CGI Atlanta.