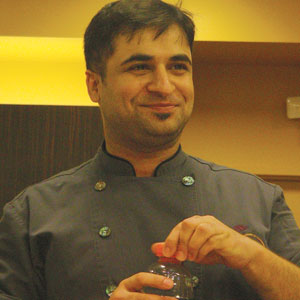 Chef Suvir Saran, shown with the second of his three beautiful cookbooks, jokes, preaches and feeds his guests at The Cook’s Warehouse, Atlanta. (Photo: Suzanne Sen)

The Cook's Warehouse in Ansley Mall was bubbling, sparkling, absolutely fermenting on May 19, 2011—Suvir Saran was giving a cooking demonstration and talk to members of the Atlanta media. Suvir is one of the most respected authors on Indian cuisine; owner of Devi restaurant in New York City (called “brilliant, refined”—he says, “We preach on the plate”); author of Indian Home Cooking, American Masala, and soon to be published Masala Farm; Chairman of Asian Culinary Studies for The Culinary Institute of America (CIA); and teacher of invention and passion in the kitchen. He was recently eliminated from TV show Top Chef Masters for preparing a healthy meal for a dieter craving unhealthy food—Suvir places principles of heart and soul high and has a passion for helping people live joyfully and healthily.

Now, peanuts are "Energy for the good life"—tremendous packages of protein, fiber, and nutrition. Suvir had come with the National Peanut Board to fill us with both peanut energy and his own special energy. He whipped up food with “another layer of flavor,” light on the stomach, and energizing for the body: coleslaw with peanuts and spices but no fatty sauce; an astonishing peanut crust over succulent chicken, gluten-free peanut flour cake with a glasslike glazing, and more. And after eating a full lunch, we were not weighted down, but truly energized!

His words delivered even more food, however, for the mind, heart and spirit. With a message to his madness, his joking, mischievous quips stirred the masala into us: we learned about peanut farmers, the problems with “changing food into creations of scientific intrigue,” childhood obesity, and what we can do for ourselves and others. Referring to the history of America’s immigrant cuisines being bastardized as early immigrants rose from poverty and began to eat from pride and become less healthy, he exhorted, “Let’s start eating more poorly and we’ll be eating more richly in reality.” His own small farm in the country produces organic food. The peanut farmers of America have helped his community with a community garden, food programs for rural children, and a kitchen for battered women. He prepares food for those he loves, and that's all of us, but especially those who need our attention.

Suvir's father has just passed away. At our lunch, Suvir had told a story: just before going on a talk show to promote his new cookbook, he called his father in India. What are you going to talk about? My book. No, talk about what matters; life is not a popularity contest—do the right thing. Suvir has been doing that, on Top Chef Masters and elsewhere. He quoted Tagore’s “Ekla Cholo Re”: “If no one answers your call...walk alone.” This summer he is scheduled to host a new TV panel show in India—worth watching! What sparks will fly?