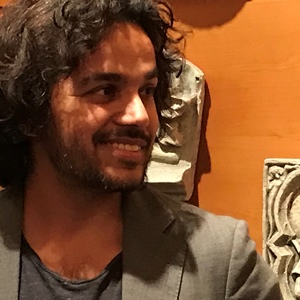 The exhibit, featuring the work of three artists, also included live painting sessions by Abhishek Singh, one of the featured artists. 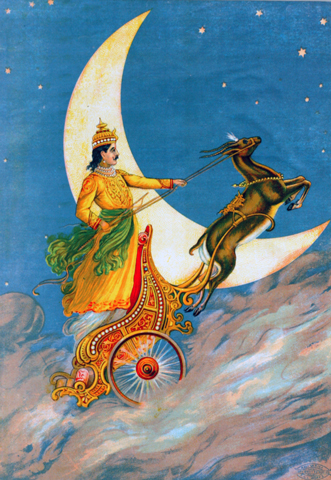 What does it mean to see the divine in new ways? If a picture is worth a thousand words, a lot about beauty and divinity is conveyed through the 70 majestic works of art by Raja Ravi Varma (1848–1906), Manjari Sharma, and Abhishek Singh in the exhibition titled, “Transcendent Deities of India: The Everyday Occurrence of the Divine,” at Emory University’s Michael C. Carlos Museum.

The exhibition, which is on view till May 17th, explores the gods and goddesses through photographs, digital works, drawings, paintings, and modern chromolithographs. Each artist offers a unique style, medium, and perspective.


The paintings of the late Raja Ravi Varma (1848– 1906) are considered to be among the best examples of the fusion of Indian traditions with the style and techniques of European academic art. Varma may have been ahead of his time in creating prints of his work through chromolithography. This reproduction and the resulting wide distribution of his prints in homes and businesses have given him enduring popularity. Several of his prints of deities, such as Ma Lakshmi, Ma Saraswati Devi, and Shiva’s family, and images from epics, such as the popular story of Nala and Damayanthi from the Mahabharata, are on display at the exhibition.


Manjari Sharma, who moved to the U.S. to earn her MFA in photography, chose to turn her lens to the deities she had grown up with in India. Her “Darhsan” series is a collaboration with a team of Mumbai-based artisans, sculptors, and painters, whose sets, costumes, and styling transform models into archetypal representations of Hindu deities, which Sharma captures in photos. Sharma’s large-scale photographs of deities in elaborate temple-like settings invite visitors to contemplate these photographs as a means for darshan—spiritual engagement.

(Right) Artist Abhishek Singh at one of his live painting sessions at Emory. (Photo: Geeta Mehrotra)

Visually stunning. Mystical. Multilayered. Ancient, yet stylishly contemporary. These are some apt descriptions for the stunning paintings of Abhishek Singh. The young, dynamic artist was in residence at Emory in conjunction with the exhibition, and conducted speaking and live painting sessions. According to the formal introduction of Singh offered on the Emory site, “Singh’s dynamic contemporary perspective incorporates graphic novels and animation and reflects conceptual concerns around the intersection between the temporal and the sacred by rendering traditional subjects anew.” Cumulatively, his comics have sold over half a million copies and have been translated in Italian, Spanish, French, and English, receiving critical acclaim for their artistic interpretation.

Meeting Abhishek Singh was a grand experience not only for the visual senses but also for his profound, thought-provoking conversations that invoked the spirit within. His spiritually inspired paintings, his humility, and his passion for contemporary issues created a sacred space which helps one go within and be still.

It is from this sacred space that he creates an image of Ma Kali, who is usually shown as expressing either anger or embarrassment—but Singh’s depiction reveals the contemplative Ma who must reflect after the war. The colors he chooses reflect the emotions of the image that he is conveying. Tears of grief, joy, relief have different colors and he chooses accordingly. His research is scientific, and he incorporates the latest digital technology and animation in his work. 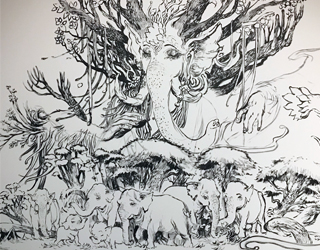 (Right) One of Abhishek Singh’s many sketches of Ganesha. (Photo: Geeta Mehrotra)

Hundreds of students, children, and adults had the opportunity to watch him draw, even as he encouraged participants to draw with him. The live painting that he created was named The Rain Maker, a contemporary reimagining of Lord Ganesha, the elephant-headed God. The intent and offering of his art was to help relieve the distress caused to billions of animals during the wildfire of Australia. “The elephants are integral to the creation of the forests. After visiting the mountains for more than a decade, I was stirred to go and see the elephants that are recurring in my dreams and paintings. I worked with various elephant organizations to educate myself on their state of affairs. In the process they welcome me into their sacred space.” His love for elephants and their role in the ecosystem is evident in the sketch pad full of elephants that he drew during his flight. 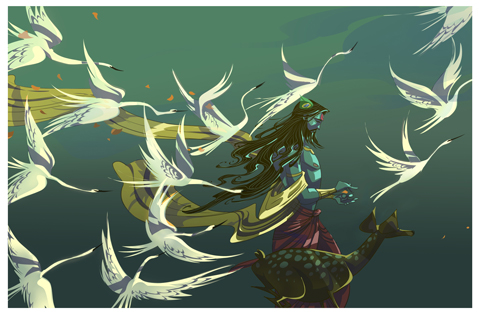 In addition to live painting with artist Abhishek Singh, there was also exhibition-related programming for adults and children: Transcendent Yoga in the exhibition galleries led by Marck Maroun of The Yoga Source and Anna Leo of Emory’s Dance Department; “Guising as God,” a conversation with Emory professors Drs. Joyce Flueckiger and Harshita Mruthinti Kamath; talks by Singh and Sharma; a workshop featuring fabrics that adorn Hindu gods and goddesses; a workshop where children looked closely look at the block-printed fabrics such as Durga’s beautiful red sari in the complex images of the exhibit, and then made their own printed textiles from blocks carved in India; and many more related events.

The exhibition was made possible through generous support from the Michael C. Carlos Museum Visiting Board, Chai Pani Restaurant Group, and the City of Atlanta, Mayor’s Office of Cultural Affairs.

One of Abhishek Singh's many paintings of his beloved elephants.