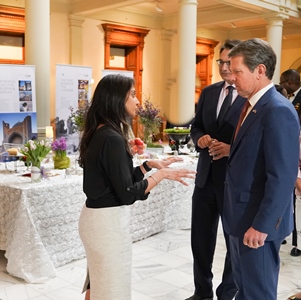 Part 1: A Celebration of Culture at the Georgia State Capitol

In celebration of Navroz (or Nawruz, Ismaili New Year), the Ismaili Council for the Southeastern United States, in collaboration with the American Institute of Architects (AIA)–Georgia, hosted the “Aga Khan Historic Cities Program (AKHCP): Transforming Cities, Transforming Lives” exhibition at the Georgia State Capitol on March 26, 2019.

The exhibition consisted of thirteen panels that showcased how culture can be utilized as an asset in social and economic development to improve the quality of life of people in rural and urban societies. By rehabilitating historic sites, many of which are spread across the Muslim world, the projects of the AKHCP over the last 30 years have promoted the growth of civil societies with the view to promote and enhance self-sustaining models that instill a sense of pride and ownership in local communities.

(Left) The Navroz haft-sin table with panels from the exhibition behind it. (Photo: Naz Samji)

Navroz, which is celebrated by people of different faiths and cultures, symbolizes a new beginning and the spiritual and physical rejuvenation of the earth. A traditional “haft-sin” table consisting of the seven symbolic items all starting with the letter “Seen” in the Persian alphabet and representing hope and good wishes for the coming year is usually displayed in homes, stores, and offices during Navroz. In addition to the exhibition, an elaborate haft-sin table was also on display in the south wing lobby of the Capitol.

The haft-sin table and the exhibition were viewed by Governor Brian Kemp and Lieutenant Governor Geoff Duncan, members of the Georgia Senate and House of Representatives, along with visitors and students touring the Capitol.

“It’s neat to be able to walk around and see such a display of culture around here,” commented Lt. Governor Geoff Duncan, observing the haft-sin table and touring the exhibition. As the day’s legislative session commenced, Rep. Samuel Park (D-Lawrenceville) began his opening remarks by welcoming the Ismaili Muslim community to the Capitol and wishing them a "Happy Navroz," adding that “Ismailis are contributing members of Georgia’s civic life.”

Speaking on the importance of communities working together, Lt. Governor Duncan commended the Jamati leadership for their efforts and also encouraged them on how they can work together through various issues and build a culture in Georgia that the rest of the world can envy.

Part 2: KSU Professors speak about the exhibit and the Humayun Tomb project in Delhi.

The full Atlanta exhibit ‘Transforming Cities, Transforming Lives’ was on view at the AIA (American Institute of Architects) office downtown.

On May 2, 2019, Kennesaw State University professors Zamila Karimi and Dr. Arief Setiawan gave a talk and led a viewing of the exhibition. Prof. Karimi emphasized the role of architecture in creating public spaces that can address many social and cultural issues. She said that conservation of historic monuments was not just restoration of bricks and mortar but restoring the heritage of communities. The choice of sites was largely decided by the impact it would have on the lives of the inhabitants of these historic areas.

She mentioned the set of ethics that guides the work of the trust, leading to public-private partnerships which last over many years. Working with government agencies and other local organizations, the Aga Khan Historic Cities Programme (AKHCP) is able to create opportunities for economic and cultural development. Prof. Karimi mentioned that this creates a sense of involvement and caring for the community which is very different from the ‘developer mindset.’

One project that highlights this view is the restoration work of Humayun’s Tomb in Delhi. As the Aga Khan Development Network website says, “Completion of the restoration builds on the pledge made by the Aga Khan in 1997, on the occasion of the 50th anniversary of India’s independence, to restore the Tomb’s gardens. Since 2007, the Urban Renewal Initiative, implemented by the Aga Khan Trust for Culture (AKTC) in partnership with the Archaeological Survey of India, several government agencies, and cofunding partners, included: conservation of over 30 monuments; the creation, by an extensive programme of landscaping, of a 36 hectare (90-acre) city park in the Sunder Nursery Batashewala Complex; and significant improvements to the quality of life for the residents of Hazrat Nizamuddin Basti, a repository of seven centuries of living culture.”

Prof. Karimi brought some articles that have been created by women’s co-ops in the Nizammudin Basti, including a journal made by the women’s group Insha -e-Noor that takes for inspiration the decorative motifs of the Humayun’s Tomb. She said that the creation of such groups serves as a platform to address other issues such as health and education, efforts that show that “heritage conservation is a stepping stone for socio-economic development.”