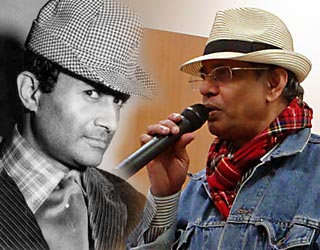 On Friday December 9, over 300 diehard fans of Dev Anand, who had passed away only a few days before in London at the ripe age of 88, gathered at the Global Mall to give respect to the late star and to celebrate his glorious life. Attendees included hotelier Mike Patel, president of the Gandhi Foundation Subhash Razdan, two American filmmakers, and many other community members from the Atlanta area.

The free program was the idea of well-known promoter Mustafa Ajmeri and was put together by Ali Asani with help of local artists Sonia Anand, Lakshmi Rao, Babar Akbar, Uday Singh and Sandeep Savla. While some sang super hits of Dev Anand’s films with karaoke tunes, Ali Asani and Sonia sang to live music, accompanied by Sanjay Patel on tabla. The sound was managed by Vijay Tandon.

Among the speakers, only Subhash Razdan and Mike Patel had firsthand knowledge of Dev Anand, both having met him in Atlanta. They shared their time passed with the star in detail with a few anecdotes.

Both Uday Singh and Asani had dressed in typical Dev Anand style with cap and muffler. Uday not only sang a few popular numbers, but also mimicked a couple of dialogues from the 1965 film Guide. Sonia and Ali bhai mimicked Dev Anand and Nutan’s acting while Ali bhai sang “mana janab ne pukara nahin” from 1957's Paying Guest. Later, Sonia danced to another song. Towards the end Sonia sang “kuhu kuhu bole koyaliya” with live music.

Aslam Pervez charmed the audience with some shayari and couplets. Babar’s daughter, who does not speak or understand Hindi/Urdu, accompanied her father for a couple of duets.

The program lasted for three hours and people were reluctant to leave when Mustafa ended it with a soulful song sung by all the artists together. It was a memorable tribute to Dev Anand by those fans who grew up watching his movies and listening to his popular songs.

1) His own words: Dev Anand responds to his admirers, chatting on a web page.

The evergreen hero Dev Anand has 'cap mania' - something peculiar. His search for new caps went on wherever his films were shot. One peculiar incident during one of his searches for new type of cap is worth narrating. He went into a shop, and found a variety of caps there. He tried almost every cap available in the shop but none was to his liking. Vexed, he decided to give up his trials and went up to the counter. The cap on the desk attracted him. He immediately enquired the price for that cap.

"I am sorry sir. I can't take money for that cap," said the owner of the shop.
"Don't bother, I will pay whatever you want," said Dev Anand.
"Still I can't sell it since it is your own cap; sure you forgot it," was the shop owner's reply.
http://www.cinegoer.com/titbitsarchives/sepdec2005.htm

3) The iconic, checkered print cap worn by Dev Anand in Jewel Thief was purchased from a shop in Copenhagen, Denmark where he was filming Pyar Mohabbat with Saira Bano.
http://www.rediff.com/movies/slide-show/slide-show-1-facts-you-didnt-know-about-dev-anand-part-two/20111208.htm