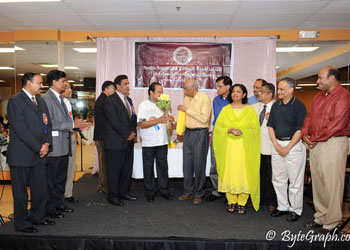 The North American Telugu Association (NATA) organized its first multispecialty health fair on Saturday 7/23/11 and 7/30/11 in Atlanta, as well as a golf outing and a fundraiser. These three events were conducted as part of NATA’s core mission for community services focusing on providing health counseling services and charitable events.

The free health fair at the Hindu Temple of Atlanta was organized by Bala Indurti (Regionl VP, NATA), Dr. Sujatha Reddy, and Dr. Jayashree Moparthy. Dr. Reddy’s SAI Health Fairs emphasize preventive care for those in need. Many, including elderly and disabled people, lined up as early as 7am. It was helpful to many visiting parents and uninsured people, said NATA president A.V.N. Reddy.

Serving about 300 participants from diverse nationalities and cultures were 38 doctors in 19 specialties, 6 nurses or technicians, and 40 volunteers—doing 70 vision screenings, 153 EKGs by Southern Heart Specialists-Riverdale, 57 bone density tests. Over 210 blood tests with PSA and HBA1c were carried out by American Labs on 23rd July at a nominal fee of $25 per test, so that consultations over the results could be done on 30th July. Chiropractic rehab, and Atlanta Spine Center were there, and Aarti Patel conducted fitness exercise classes and gave nutrition advice. The SHAPE study by Global Diabetic Research Center of Emory University presented information. Nina Prissakari of Body & Brain Holistic Yoga Center in Marietta, Georgia and her colleague Elaine Simmester, a clinical reflexologist, demonstrated interesting aura imaging equipment.

Fund Raiser Dinner and Musical night collected over $50,000
NATA’s fundraiser dinner on Saturday 7/30/11 was attended by close to 300 people. Bala Indurti, regional VP, and his team worked for 3 months on the event at which Sri Ghantasala Ratnakumar garu enthralled the audience with golden melodies of a bygone era. NATA thanked Venkat Chennubhotla, Phani Dokka, and Ramesh Duvvuru for support and coordination; Venkat Chennubhotla for sponsoring the sound system; Prashanth Kollipara for photography; Siva Gaddamanugu for flyers for web/email coverage; and Dr. Adisesha Reddy garu for attending and making it a success.

NATA has pledged to preserve the memorabilia of eminent Telugu singer and composer Ghantasala Ven-
kateswara Rao (1922–1974), his awards, achievements and the legacy he left behind for generations to remember and enjoy, said AVN Reddy. Cost of this project is about 15K, which will result in a museum in Chennai. Thanks are due to Venkat Garidepalli for coordinating friends to raise money, and to major contributor Dr. Prem Reddy.

Golf Outing lifted the NATA spirit
A charity golf outing was held at Bear’s Best Atlanta Golf Club, Suwanee, GA on Sunday July 31, 2011 with net proceeds benefiting the eye health camps and other NATA seva day activities to take place this coming December in rural villages of Andhra Pradesh, India. The program began at 7 am with a registration/breakfast and social hour, shotgun start at 8:30 am, and awards/lunch at noon. The tournament was impressive, with 72 players participating in an 18-hole foursome and others watching and enjoying. It brought in NATA awareness among the local businesses and corporations owned by Telugu people.