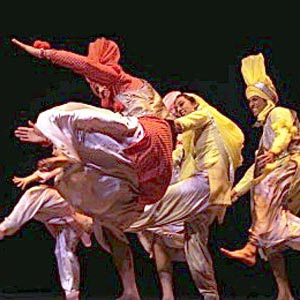 The Indian Cultural Exchange (ICE), a student organization at the University of Georgia, hosted its 14 th annual India Night (Zamaana Aaj Kal: Through the Generations) on Saturday, Feb 19th at the Classic Center in Athens, Ga. “We’re not focusing on only the Indian world or only the American world, we’re focusing on a world that we create, combining the Indian and American culture,” said Sumon Ray, emcee and one of ICE’s three India Night chairs.

The three hour show, packed with more than 1200 college students and parents included performances by dance groups from UGA, Emory, Georgia Tech, GSU and Mercer. “We had about 15 teams try out and we have 8 acts this year,” said Rupal Patel, dancer in Champa & Chameli and ICE secretary.

Karishma Amin, Ricky Doshi, Radina Marinova, Tushar Patel, Sumon Ray and Nick Thompson served as the emcees for the evening. They created several entertaining skits including a 911 call center in India, and the stereotypes of each college in Georgia.

Gator Bhangra from the University of Florida showed their stunts and steps through creative bhangra movements. UGA’s Champa and Chameli danced to an array of Bollywood songs—“We combine Bharat Natyam … with hip-hop and Bollywood,” said Rupal Patel—followed by Emory’s Azaadi wrapping up the show with a bhangra item.

In addition to India Night, UGA’s Indian Cultural Exchange organizes several fun filled activities for its members including ice cream socials, ski trips, a Diwali dinner and an annual formal event. Over the last 18 years, ICE president Prashant Patel says, the group has been recognized as one of the most prominent student organizations at UGA, and India Night has been recognized as the “most outstanding cultural event” on campus.

“It was just an amazing experience,” Ray said. “I unleashed the Indian in me. I celebrated with everyone and I was a different person tonight, and it was amazing.”