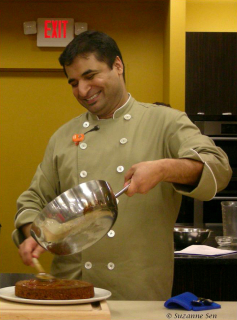 Atlanta was fortunate to have another visit from Suvir Saran, acclaimed chef, restauranteur, teacher, and author, when he brought his "Favorites from Masala Farm" to the Cook's Warehouse kitchen in Midtown on April 5, 2012.

Last year he had come with National Peanut Board's President Raffaela Marie Fenn and his book American Masala, a gorgeous cookbook bringing Indian spice and fabulous taste to the American table. This year registered dietician and nutritionist Sherry Coleman Collins also came, and the new book with them was Masala Farm: Stories and Recipes from an Uncommon Life in the Country.

Happily, this book has much more of Suvir's prolific writing as well as recipes and, since he loves to give others credit, his resources. It can be read for the stories and joy of getting to know Suvir and the food, farm, and community he loves—which means being bowled over by the combination of mischievousness and honesty that lets him discuss inconvenient truths. The trick, he says, is to invite guests into the kitchen as you cook, let everyone test, taste, and have fun—then you can "talk all 'wrong' things [politics, religion, philosophy], and nobody kills each other because there is food!"

The first thing I heard Sherry say was "He is a unique person. He has the ability to really see you: he sees you and he sees you." And so he says what is important, because he cares. Besides his love of wonderfully tasty food, he is after the best for individuals, communities, farms, nature, and society. His talks are part cooking, part teaching on health, poverty, social justice—and the joy of connecting and caring. 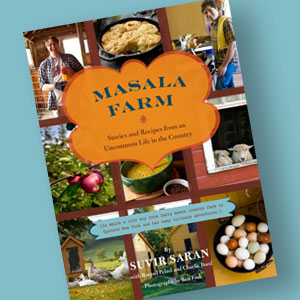 As for the food, Suvir teaches techniques that suddenly release odors and flavors that make you jump with delight—stronger than any met in a typical restaurant. His own Dévi is the first Indian restaurant in the U.S. to have earned a Michelin star, with his cooking based on healthy and delectable home cooking of India. This book, having more meat dishes than his others, is meant for special occasions, with tamarind chicken wings that family and guests love, roasted Manchurian cauliflower, and comfort foods that are anything but ordinary, like his special khitcheree.

Many of Suvir's recipes include peanuts (surprisingly high nutrition), peanut flour (gluten free), and highly refined peanut oil (allergy free and useful for frying), which is apt since he says comfort foods of India are cooked with peanuts. But with the spices he uses ("the gift India gave the planet") and his game-changing techniques, "every ingredient should start singing and dancing on your tongue!" And does it ever!

---------
Website Bonus Feature
Years ago, the ISKCON temple on South Ponce de Leon Avenue used to have a small restaurant downstairs, with peanuts deliciously used in their food. Here are some interesting notes on peanuts in India and a recipe found by the late Yamuna Devi, about whom Suvir says teasingly, "That 'hippie' did more for Indian food than the Indian people!":
http://www.indiadivine.org/audarya/world-review/444989-yamuna-dasi-visiting-vast-peanut-growing-estate.html