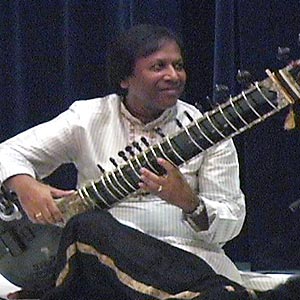 Fans of Hindustani or North Indian classical music were treated to a rare combination: a sitar and vocal jugalbandi on Saturday, September 24, 2011, at the Georgia Tech Student Center Theater.

Jugalbandi, meaning “entwined twins,” are duet performances in Indian classical music where
the solo artists perform as equals, neither being accompanist, and engage in playful competition.
The performances are often presented by two instrumentalists or two vocalists, but very rarely
does one listen to a vocal-instrumental duo. On this evening Atlanta had the opportunity to listen
to veteran world-class sitarist, Ustad Shahid Parvez, together with two upcoming artists—disciple
of Pandit Jasraj, Atlanta’s own Pritam Bhattacharjee, and disciple of Ustads Allah Rakha and
Zakir Hussain, Atlanta’s tabla guru Prithwiraj Bhattacharjee.

The concert began with a solo vocal presentation, for which Pritam Bhattacharjee had chosen
raga Shuddha Bareli, in which he sang a vilambit and a drut composition. He was accompanied
on the tabla by Prithwiraj Bhattacharjee, on the harmonium by Amitava Sen, and on the tanpura
by Usha Balakrishnan.

Ustad Shahid Parvez then presented a solo sitar segment, where he explored raga Gavati in three
compositions, followed by a dhun based on an Afghani folk tune.

After a brief intermission, the second half of the concert consisted of the sitar-vocal jugalbandi
in raga Yaman. The familiar raga provided the audience a base to appreciate the vocal and
instrumental nuances brought out by each artist. And the interesting sawal-jabab or “question-
answer” passages elicited spontaneous applause from the listeners again and again. Rather than
describe the atmosphere that this jugalbandi created, the reader is invited to listen to the following
clips:

A few individual sponsors made this concert possible; Shri Tarun Talwar organized the event
with assistance from ICMS.