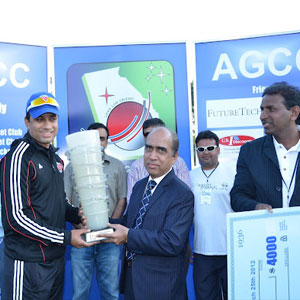 
The Atlanta Georgia Cricket Conference (AGCC) under the new president Suren Gandavaram took the initiative to promote the game of cricket in Atlanta and conducted a warm-up training camp just before the start of the season. The goal of the camp was to help all-league players get in shape and learn the finer points of the game from former Test and first class cricketers.

Camp was conducted on March 4th, 2012 at McNair Ground. The 28 players who attended will go on to represent the league this year. Coach Clayton Lambert, former West Indies Test player, spoke about his experiences in international cricket and advised the players to be focused, keep fit, and play in the spirit of the game. He reminded young players that future success would not come without hard work. Coach Khalid Qaiyum, India, first class cricketer, gave personal experiences from his cricketing career. He left the players with advice not to get dejected if they were not initially selected. He told them to simply come back and prove that you are the best and perform twice as well as they did the first time. Coach Nadeem Younus, Pakistan, first class cricketer, spoke of his experience and gave all the players an opportunity to understand what technique is all about and how to adapt to different conditions on and off the field. Coach Anand Tummala, speaking of his maiden experience playing for USA National team, said, “One has to be determined and aim for success, and that will come with sincere effort and hard work.”

The camp started with 45 minutes of running and warm-up exercises, followed by fielding practice. There was a break of 15 minutes where players were able to get into the nets. Video of each player was recorded for analysis, and players had the opportunity to discuss their performance with all the coaches available.

Players said that it was the best experience ever in Atlanta, and they appreciated the AGCC's approach to the development of cricket in Atlanta. All league players were looking forward to the season which started on March 18th 2012. 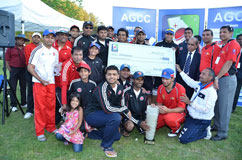 
The Atlanta Georgia Cricket Conference (AGCC) Inaugural Spring T20 Carnival 2012 was played on March 24-25th at McNair School ground, Atlanta. This is the first time a competitive cricket event of this size with prize money has taken place in Atlanta. Six teams participated, from all over USA. The tournament was played on league basics, giving all the teams a fair chance.

The tournament started on Saturday, with 6 matches. The US Tigers won both of their matches; Cric Depot lost one and won one of its matches, as did Future Tech, the Atlanta Hurricanes, and DJ XI; and Mississippi lost both of their games.

Three matches followed on Sunday, and US Tigers was the first team to qualify for the finals, their tie match with Future Tech decided on a super over. Cric Depot and DJ Eleven were tied on number of match wins, so CricDepot made it to the finals on the run rate basics.

In the finals, CricDepot won the toss and elected to field. US Tigers started the innings by losing two quick wickets, but Timil Patel and Ravi Timberwala did exceptionally well, played some calculated shots and placed the ball between the fielders, and batted through almost to the end of the innings with a solid knock of 60 and 56 runs respectively. Timil, who played competitive cricket in Gujarat, played a sensible knock and guided the team to a formidable total of 197 for 7 in allotted 20 overs. He was ably supported by other batsman Ravi Timberwala, who was aggressive at times and contributed well to the team score.

R. Fletcher and Redwood got 2 wickets each for Cric Depot. Their team started with a definite plan, getting runs at ease. Once they started losing wickets at regular intervals, they fell behind on run rate and achieving the target of 197 runs was history. It was not until the fall of Khasif Rana, who scored 22 runs, that Redwood came, sending the first 2 balls of his first over from Timil Patel, leg spinner, for two consecutive sixes over mid-on. He got settled and after 2 over he hit left arm spinner Minal from the other end for two towering sixes. It looked like Cric Depot was in the game to chase their target. To every one’s surprise Redwood fell in the 13th over, playing an unwanted shot and got out when the team score was 121 runs and the match was pretty much over. Cric Depot was all out for 135 runs in 20 overs.

Timil Patel received the Man of the Tournament trophy and award of $200 and Man of the Match award (Finals) of $150. Tulaib Faizy of Atlanta Hurricanes received the award for maximum number of sixes in the tournament.