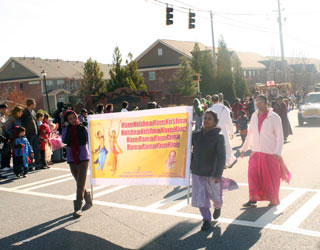 Photo: Around 10,000 people marched or looked on as GVA members carried their banner in the parade.


The City of Johns Creek celebrated its fifth anniversary by organizing the Johns Creek Founders Day Parade on the 3rd of December 2011. Members of the Gaudiya Vaishnava Association (GVA) participated in both the parade and the music fest that followed.

Thousands of spectators were able to see the GVA's ratha yatra (or chariot parade) with statues of Shri Jagannatha, Shri Baladeva and Shrimati Subhadra Devi carried on a well decorated palanquin, and maha prasadam (sanctified food) was distributed to the crowd on the route. Participants carried banners of the Hare Krishna Maha Mantra. The parade, which started from Morton Road on State Bridge, culminated at the Ocee Elementary school premises. Many dignitaries, including the Mayor of Johns Creek Mr. Michael E. Bodker, and sheriffs from Roswell and Fulton County police departments, were honored by GVA by presenting them with garland and shawl from the Indian Holy City of Vrindavan and the GVA yearly magazine, Bhagavat Vani.

At the finale, GVA participated in the Santa Jam celebrations held at the Johns Creek High School and entertained the crowd with wonderful Hari Nama Sankirtan—chanting of the holy names of the Lord.

GVA was interviewed by Mr. Matthew Quinn, editor of the Johns Creek Herald weekly newspaper, who published a mention of the similar but grander events at Puri in Orissa, India, which have been carried out for thousands of years. GVA had done this ratha yatra successfully here for the second year in a row.