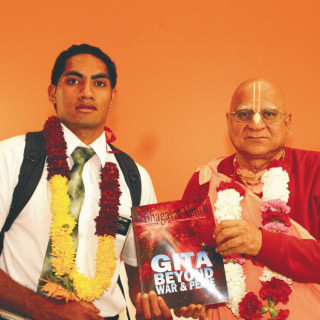 Gaudiya Vaishnava Association (GVA) is a nonprofit spiritual organization founded by His Divine Grace Swami Bhakti Swarup Tirtha Maharaj to spread spiritual awareness and to preach as the only means of deliverance, the chanting of the Holy Names of God, Shri Krishna. To bring this awareness to Atlanta, GVA conducted a month-long Utsav starting with the Duluth Fall Festival.

On September 29th, GVA conducted the Ratha Yatra as part of the Duluth Fall Festival parade. Devotees carried Their Lordships Sri Jagannath, Sri Baladeva, and Srimati Subadhra devi in a decorated palanquin in an age old tradition that originated from Puri, India. Lord Jagannath bestows His mercy by coming outside the temple and being carried in a rath (chariot) as a yatra (journey). Devotees also carried the Hare Krishna Maha Mantra banners. Citizens of Duluth happily joined the two-hour parade and danced to GVA's Harinam Sankirtan (chanting of the Holy Name of Shri Krishna) with karatalas and mirudangas.

The Shrimad Bhagavatam discourses were given by Swami B.S. Tirtha Maharaj between October 1 and 17 in the Cumming and Alpharetta areas. Shrila Maharaj spoke from the 2nd Canto, 'The Cosmic Manifestation,' with explanations about God realization, pure devotional service, the process of creation, the scheduled incarnations of the Supreme Lord with specific functions, and how Bhagavata Mahapuran is the answer to all questions. Shrila Maharaj presented the Upadeshamrita (Nectar of Instruction), written by Shrila Rupa Goswami, a direct disciple of Lord Shri Chaitanya Mahaprabhu and leader of the Goswamis. In this world influenced by the modes of passion (greed) and ignorance (lust), the teaching urges control of the senses, especially the tongue, to live a happy and peaceful life.

A question and answer session followed. Members from The Church of Jesus Christ of Latter-Day Saints (Mormons) attended the final day program and posed a series of questions, e.g., When did creation begin?, Who is God?, What is God Realization?, How to be Joyful?, and How to achieve Universal Brotherhood? Shrila Maharaj gave examples from the Vedas and the Bible, pointed out the common aspects of Vaishnavism and Christianity, explained the position of Lord Jesus Christ, and showed that service to God is superior by narrating the story of Thomas Becket (also known as Saint Thomas of Canterbury). They appreciated the answers, and each one received the Bhagavat Vani magazine. Shrila Maharaj was in the U.S. from September 24th to October 27th on a tour delivering spiritual discourses in New Jersey, Texas, and Georgia.

On October 22nd, GVA performed Harinam Sankirtan on the auspicious Ratha Yatra of Lord Sri Venkateshwara with Goddesses Shridevi and Bhudevi at The Hindu Temple of Atlanta, Georgia. 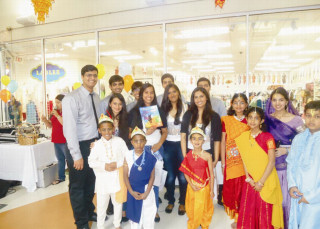 GVA distributes lectures in English, Hindi, and Tamil in audio/video media and hosts a weekly class in New Jersey, Texas, and Georgia, to answer humanity's problems. For information, see www.bhagavatvani.org.