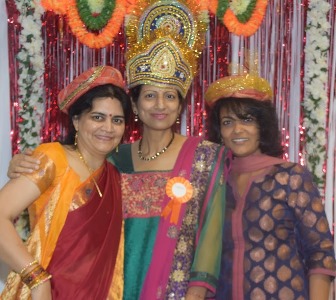 Consul General Nagesh Singh and Consul D. V. Singh attended. VHPA Atlanta Chapter President Kusum Khurana welcomed all. Well-known satirical poets and TV artists Sanjay Jhala and Ved Prakash Ved performed; they are two talented Hasya Kavi, recipients of several awards including Presidential Award in India, and have performed widely on national and international platforms. Truly living up to their reputation, they had their audience laughing and clapping at every single joke they made, be it political satire, social issues, or family drama!


Among the local Atlanta artists, two talented vocalists, trained in Carnatic music, Shree Varshenee and Nithya Shree were the first to perform. This was followed by Rashmi’s group of little ones who stole the audiences’ hearts with their dance on a foot tapping Goanese folk song. The talented students of Padmaja Kelam of Kalaivani Dance and Music Academy presented classical Bharatnatyam. The youth group of Hindu Swayamsevak Sangh (HSS), coordinated by Aarti Sarda, presented a perfectly coordinated Lezim dance; the discipline that is the cornerstone of HSS was quite evident in the performance of these talented teens. Talented young ladies from Shweta Khatri’s dance school presented a Bollywood Medley dance, their electric blue costumes perfectly complimenting the cheerful melodies. Volunteer teachers, coordinated by Neetu Sharma, from the VHPA Cobb Balvihar Hindi School, performed Bollywood dances with songs from the black and white era to the present day. Two talented singers, Tushar Mirajkar and Meenal Shrotriya, regaled the audience with blockbuster Hindi songs, new and old. The program concluded with a beautiful Rajasthani folk dance. The program was anchored by Eesha Oza, Aditya Ragunathan, and Sabitha Venugopal.

The audience was treated to a free delicious dinner provided by Ambaji USA Shree Shakti Mandir. Vendors were there and a photo booth. Newly released Ramayana Postal Stamps, a first in the history of India, were also available for sale. A few attractive raffle prizes were up for grabs. Last but not least was a show of fireworks for the kids and kids at heart! Youth volunteers from Balvihar helped all the adult volunteers throughout the evening.

Generous donations from the audience allowed VHPA Atlanta Chapter to support 24 children for one year in India. A donation of $250 meets the needs of a child for one year, but any donation is highly appreciated. 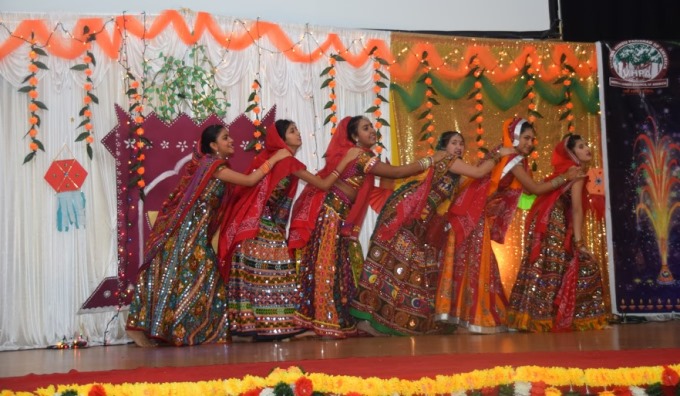