Some of the fondest childhood memories most of us carry are of the large family weddings back in India. Adults busy setting things up, kids getting a free run, parents happy that children will get precious "bonding time" with members of their extended family. (In plain English this means kids play and eat as they wish, without parents feeling guilty about it!) A large kitchen bustling with people, lots of food, and celebration in the air. Large after dinner get-togethers, the inevitable ubiquitous antakshari and those vehement fights over the legitimacy of the chosen song! Well, to get to the point, take the wedding out of this scenario, provide the beautiful setting of a lakeside campsite, and you get a pretty good, if not comprehensive, description of the latest World Hindu Council of America (VHPA), Atlanta Chapter family camp.

The camp has been an annual tradition for almost three decades with a few exceptions. The camp is open to the community, usually running from Friday evening to Sunday afternoon and managed by a team of dedicated volunteers.

This year, camp was held from April 3-5, 2015 at the scenic A. H. Stephens State Park in Crawfordville, Ga. The park offers a group camp facility with about 40 cabins divided in four units, a central kitchen and dining hall, several large open fields, equestrian trail, and two lakes with boating facility. With 42 families signed up, the group camp was filled to capacity. 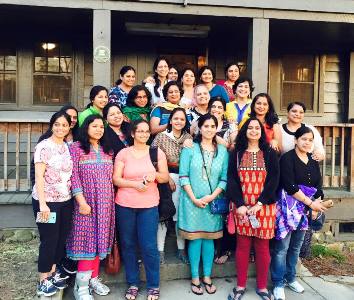 As campers arrived, they were registered by youth volunteers and allotted cabins. Other volunteers got busy in the large kitchen, getting snacks and dinner ready for all. As with all VHPA camps, dinner was preceded by evening prayers. Children took center stage, singing beautiful bhajans, a proud moment for all of us who strive so hard to blend the two great cultures that we are a part of. After a fresh cooked dinner the campers got to introduce themselves. Friday's events concluded with a highly competitive antakshari, bringing out a lot of singing talent. Before retiring for the night, the campers were made aware of camp rules. Each unit was assigned duties in rotation to help with cooking and cleaning. Women usually help with cooking and men do the dishes in the large commercial dishwasher; feedback from campers has always rated these mundane chores as a lot of fun when done with friends!

Saturday’s weather was at its spring best, ideal for all the outdoor activities, beginning with an early morning yoga session. Morning prayers were followed by breakfast and a session on pranayam and meditation conducted by Isha Yoga volunteers. Younger kids made tie-dye T-shirts. Teens gathered in the basketball court to have a discussion on what Hindu religion meant to them. While it is hard to get teenagers to talk, let alone on religion and that too, outdoors on a sunny morning, the session pretty much ran on auto-pilot. Kids shared their knowledge and opinions, with some inputs from the grown-ups. The session was meant to help children identify with their culture, respond appropriately to stereotypes, and dispel misconceptions about the Hindu way of life.

The day continued with sports, cricket, basketball, and Frisbee. Campers enjoyed boating on the lake and walks along the scenic fields. An evening session brought all campers together again for a discussion of "Vasudhaiv Kutumbakam," the Hindu principle that the entire world is one family. The virtues of this lofty principle were explained, and questions were raised on preserving our identity in a multicultural society. The take-away was that any principle has to be followed, not blindly, but in proper context and with a grain of salt! 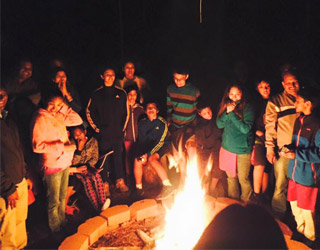 Next was the Talent Show, again dominated by kids. Songs were all American, while dances were mostly Bollywood. A few enthusiastic grown-ups shared their musical talent, singing melodious Hindi songs. A campfire was accompanied by popcorn, jokes by kids and more singing, and continued well past midnight.

On the last day, morning prayer followed by a heavy brunch marked the end of activities. Campers cleaned up the facility for check-out as the kids tried to fit in a last few games with their friends.

Cooperation and team spirit shown was commendable and feedback was very positive. The happy faces of kids were evidence that they had had a great time, like an extended sleepover! As with any event for 100 adults and 50 kids, there were a couple of "we could have done this better" moments, but these tend to bring out the best in us. If this were an antakshari, we would have fielded the Hindi song "thode shikve bhee hon, kuch shikayat bhee ho, to mazaa jeene ka aur bhee aata hai..." 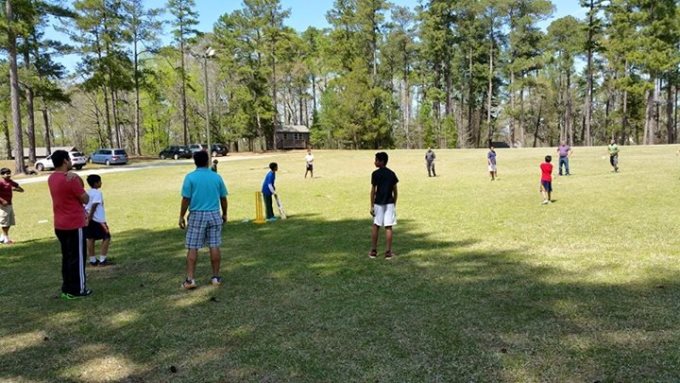