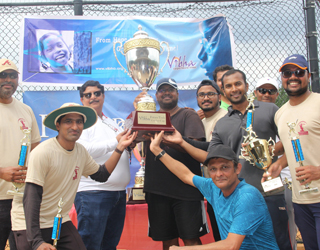 On September 6, in Atlanta, a cricketing excitement was building. The cricket contest at the Sharon Springs Park in Atlanta was a five-over blitzkrieg! The final match at the Sharon Park between Rapid IT Monsters and Paramount United CC reached the nerve-wracking stage of requiring fourteen runs in the last over.

[Left] Sravan Vellanki, Chairman and CEO of FutureTech giving the rolling trophy to the champions.

To introduce new excitement, Vibha chose a format called Singapore Sixes, and with some tweaks came Futuretech Vibha Sixers Cricket Tournament. Anj Balusu, General Manager at FutureTech and the architect of the new Sixers format said, “Since inception, Vibha Cricket has been bold to come up with new ideas to improve competitiveness, sporting spirit, and to make it fun for all. Vibha laid the foundations for several cricket competitions in Atlanta, and we at FutureTech are happy to be part of all the innovation.”

Six players a side battling it out in five overs in each innings in a much-shortened boundary, forcing four different bowlers to bowl, each wide and no-ball penalized with three runs, batsmen forced to retire after scoring 30 runs—the new format was met with a mix of excitement and trepidation.

Taking full advantage of the small ground, some batsmen opened their innings with five sixers in the first five balls and retired for the innings. Any short ball was swiftly sent over the ropes. Scoring twenty runs an over became on-par. Bowling a maiden over needed extraordinary bowling—and there were extraordinary bowlers!

During the competitive knock-out games, the ball dominated the bat resulting in some low-scoring games. Rapid IT Monsters and Paramount United CC entered the finals beating Future Tech and Team Pyramid respectively in surprisingly one-sided matches, with some top guns failing to fire at the right time.

The finals, on the other hand, lived up to the expectations. Scoring six sixers and four boundaries, the United CC made a respectable 82 runs in their five overs, with Manoj Yadagiri and Dinesh Anandan scoring 24 and 33 runs respectively. Dinesh came back to bowl the best over of the match, conceding only 5 runs. In the very next over, Monsters’ Jigar Soni more than compensated for the first tight over by scoring 6,4,6,6,Wide,6 taking his individual total to 30, the maximum. United CC fought back into the game by taking two wickets in the next over. Ganesh Lad seized the moment in the next two overs scoring 31 runs with three sixers and two boundaries. Monsters team and fans led by their manager Sanjay Narla celebrated a victory dash to the pitch as the penultimate ball hovered in the blue sky over the fence. 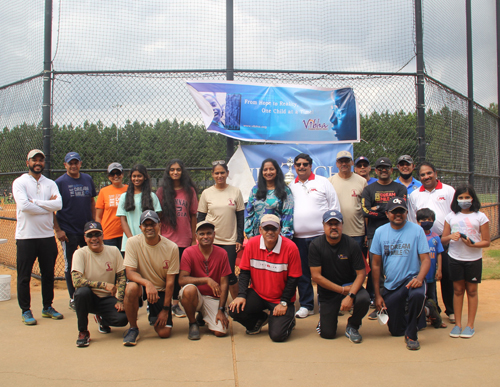 Pradeep Hegde of Team Pyramid won the Best batsman award, with a total score of 74 runs. Jigar Soni walked away with Man of the Tournament for his all-round performance with both the bat and the ball for the Rapid IT Monsters. He also bagged the Best Bowler award for taking nine wickets in the tournament and the Man of the Match for the Finals.

[Right] The innovative team of Vibha volunteers with the sponsors.

Rama Ryali, who led Vibha cricket several times in the past, said “Vibha is always resilient in the face of adversity, and we saw an opportunity to experiment and come up with a game-changing format. I am so happy that all the players loved the Sixers tournament. The ultimate goal is to raise funds for the cause of education, and we rose again to meet that challenge”

Thanking all the players for their participation in the tournament, Sravan Vellanki, the Chairman and CEO of FutureTech, said “We are extremely proud to be associated with Vibha for nearly two decades. I congratulate the core team to have come up with this new format in a challenging environment and all the volunteers to have executed it so well, as always with dedication.”